I love hearing from readers for many reasons but top among them are the thoughtful questions they raise that help me learn.

Sacha Adam emailed recently with a pertinent concern about truthseeking groups in business. That spurred an email exchange that helped me clarify my thinking, so I wanted to share it here.

How do you express uncertainty, specifically around the likelihood of a negative outcome and stay consistent with the leadership responsibility in product management to be “instilling confidence, which primarily takes the form of communicating progress, direction, status etc.”?

As an example, he was concerned that saying, “‘There’s a 60% chance that this will be successful’ isn’t a confidence inspiring message, even if there is a mitigation plan around it.”

That’s a great question. These are the five ideas I expressed in my response:

Here’s an example of how to express confidence AND uncertainty together: “We have explored all the possible options and we estimate that this option is 60% likely to succeed while all other options combined are only 40%. So, clearly we are going with option A.” This is a very powerful way to communicate. It is important to communicate that the option you are taking is in comparison to other choices, which are worse, and that there is no way to ever be 100% certain of success. But you are confident this is the right choice.

(2) When comparing options, once you have landed on a preferred choice, always ask yourself and your team this question: “Is there some piece of information that we could reasonably uncover/discover within the time we have to make this decisionthat would change what we think is the preferred choice?”

If the answer is yes, go look for that information. If no, move on and bank the decision. It is an important exercise to go through.

(3) Realize and communicate clearly after this exercise (and before making the decision) that there may be information that reveals itself after the fact that, if you had known about it, would have changed your decision.

It will feel like you should have known about it, that it should have been discoverable. Usually, it is the case that it wasn’t knowable ex ante so warn everyone it will feel that way after the fact.

(4) Sometimes the information was actually discoverable.

But in that case don’t dwell, just add it in to your process as you are answering what information you need to find to inform your NEXT decision. Sometimes we realize some piece of information is relevant to a decision only by experience. Dwelling on not knowing isn’t helpful. Using that new experience to inform decisions going forward is.

(5) If you don’t express uncertainty, your team will default to a guarantee.

(a) It’s a surprise that is not well prepared for because no one acknowledged explicitly that it might not work out so plans are likely not in place ahead of time. This creates a reactive organization rather than a nimble/agile one.

(b) It creates a culture of “I told you so.” When an option is being expressed as a guarantee, there are always those who will see possible issues, possible failures, but they won’t feel free to express them because they will think they aren’t being a team player, they are being a naysayer. Then when it doesn’t work out that person whose opinion was suppressed (not on purpose of course) will be disgruntled and feel like they saw it coming.

Look for how he put this in action in next week’s newsletter!

Another reader, Nate O’Neil, shared this gem of a video of Penn State’s footballcoach, James Franklin, talking about the importance of learning from wins.

After a pair of games Penn State won 51-6 and 63-10, Coach Franklin explained that, “In some ways, I coach them harder after wins.”

It’s a short video (under 2 minutes) but worth watching because he gives a good practical approach to post-outcome learning.

We very often miss the lessons contained in wins because we are too busy patting ourselves on the back for our accomplishment. Digging around for the things we can improve can feel bad, like we aren’t getting credit.

Of course, there is plenty to learn from mistakes in wins and we would do well to dig around for them.

As Coach Franklin says, “The reality is that the mistakes are there whether you win or lose and what’s going to allow you to keep winning is getting those things corrected.”

Think of all the benefits he gets by identifying and focusing on mistakes in wins:

I especially liked his illustration of the last point. “there’s still a bunch of stuff on tape that’s ugly and smells bad and winning is kind of like the deodorant that covers it up.”

DECISION-MAKING IN A HURRICANE
An editorial by Scott Romine in North Carolina –
School closures, resulting, and probabilistic thinking

Decision-making in preparation for Hurricane Florence in North Carolina raised several issues worth noting, not just for natural-disaster preparedness but for potential biases and obstacles in all kinds of decisions.

After Florence, Scott Romine, a professor at UNC-Greensboro wrote an editorial in the Greensboro News & Record, “Universities, hurricanes and risk management.” His campus and his daughter’s (UNC in Chapel Hill) closed on Wednesday and Thursday, September 12 and 13.

Mild weather was predicted for those days and, especially after the weather didn’t get rough until the weekend, many questioned whether the closure on those days was unwarranted or overly conservative.

Romine evaluated the decision with reference to some Thinking in Bets ideas (as well as unrelated ideas from Jon Haidt’s and Greg Lukianoff’s The Coddling of the American Mind). I enjoyed his analysis and recommend you check out his piece.

After pointing out on Facebook late that week that it hadn’t even rained yet, he realized he was resulting.

As Romine deftly put it, “Winning money at Russian roulette doesn’t mean that playing was smart.”

He asked the right kinds of questions, like the cost of closing the university, the likelihood and cost of a catastrophic outcome from staying open, and what information could become available in the window for decision-making.

Romine concluded, “I still think closing UNC was 62% likely to have been a bad decision – 74% for UNCG.”

The whole blog post is a great application of probabilistic thinking and how you evaluate a decision after the fact. Highly recommend the read.

I recently retweeted a good suggestion for dealing with our blind spot for evaluating our own ideas, which led me to some additional research on the subject.

Initially, I posted this tweet, which came from Gurwinder (@G_S_Bhogal): 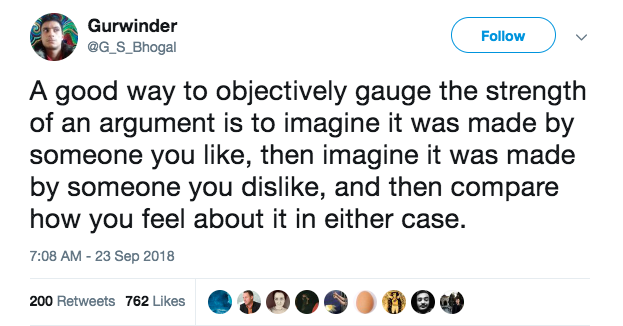 Robert MacCoun, a Stanford law professor and social psychologist (whose work was a go-to source for several important Thinking in Bets concepts), replied, “Or get researchers to feed you your own arguments without telling you they are yours.”

MacCoun was referring to work recently cited in an NPR editorial, “The Selective Laziness of Human Reasoning.”

The piece summarized a pair of experiments conducted by Emmanuel Trouche and colleagues, appearing in the journal Cognitive Science, with the similar but even shorter title, “The Selective Laziness of Reasoning.”

Trouche and colleagues created situations in which people evaluated arguments they didn’t recognize were their own.

They had people solve logic problems and justify their answers. Later, they showed the people alternative conclusions and arguments by others, giving them a chance to reconsider.

But they weren’t really the choices and arguments of others.

For one of the five problems, they showed participants their OWN initial choice and argument.

(For the other problems, the alternative was a plausible answer, written by the experimenters.)

First, HALF their subjects didn’t recognize they were looking at their own arguments. That itself is an interesting finding, but it’s really just a set-up for getting people to evaluate their own arguments without the potential of their endowment to their own ideas getting in the way of objective evaluation.

Second, for the subset of subjects that saw their own answer and reasons, HALF of them rejected their own arguments.

They were much more critical of their own arguments when they thought the source was someone else.

This is a good illustration of the importance of getting another perspective from our own – even if we have to get it from some other version of ourselves. It certainly points out why it’s good to get other people to check our blind spot, as well as explore ways to implement “time travel” (or “perspective travel”).

Last week, I wrote in the newsletter about Steven Johnson’s article in Medium, about why decision-making should be a required high school class.

Joseph Sweeney, executive director of How I Decide (the nonprofit I cofounded to develop approaches to teaching decision-making), also writing in Medium, builds on Johnson’s call to action with a thoughtful, nuanced take on decision education.

Joe reminds us that if you add something, you have to remove something else.

Add a decision education class, what class is being nixed to make room?

This problem of limited time in the day and limited resources is a barrier to the implementation of any new program or class. We have (re)learned this lesson from the challenges the campaign to introduce social and emotional learning (SEL) to schools has faced.

Joe recommends taking a multidisciplinary approach “within the already existent, though nascent, commitment to educating for Critical Thinking,” instead of making decision-making a required class:

“This rich version of Critical Thinking deserves, and would be supported by, a K-12 scope and sequence, along with appropriate assessments, woven into every subject. It will require changes in both the content, the “what” that is learned, and pedagogy, the “how” of teaching. Students need direct instruction and practice with the skills of critical thinking. They need to develop the disposition for effortful thinking and learning. Teachers and curriculum developers need to direct learning activities in ways that increase the likelihood of learning transfer. And teachers need to make metacognitive monitoring explicit and overt.”

There’s a huge distance between agreeing that decision education should be part of a school curriculum and actually implementing it. If you’re interested in understanding the next level of thinking involved in getting decision education into schools, I recommend you read Sweeney’s piece.

And please check out How I Decide.

SOME RECENT PODCASTS I’VE BEEN ON

I’ve had some very enjoyable recent conversations about the decision process and challenges that arise in particular situations (for example, real estate investing). Please check out these podcast episodes: