I recently wrote a piece for Michael Smerconish (@Smerconish Smerconish.com), “Why People Choose Party Over Principle,” and further discussed the piece on his CNN show. The piece was informed, in large part, by the work of Jay Van Bavel and Andrea Pereira who offer some great insights on how cognitive bias drives political thinking.

The big takeaway: Identity protection drives the way we process information. And the political party we belong to – our tribe – is the identity that we’re trying to protect. So “…the tribal nature of the human mind leads people to value party dogma over truth.”

Clearly, being part of a tribe gives us a sense of belonging and distinctiveness. Less obvious is that the tribe helps us to know what to believe and what is moral. Beliefs are nearly always uncertain. We don’t have all the facts. We can’t know for sure whether a certain policy will lead to the outcome we are hoping for. We don’t even necessarily know what outcome to hope for, what is best for the country or ourselves.

We aren’t experts in all things. It is hard to know for sure what policies to support. We look to the leaders of our tribe for resolution.

The result is that when there is a conflict between a position we have on an issue and our party’s position, we resolve the conflict not by leaving the party but by changing our position because our tribe supersedes our principles when it comes to identity.

I discussed this in connection with a pair of polarizing political battles that were raging at the time (the tax cut and the government shutdown). Just in the last week, I’ve collected a few more examples where you can see this pattern of conflict resolution, where the parties shift positions and constituents follow along: 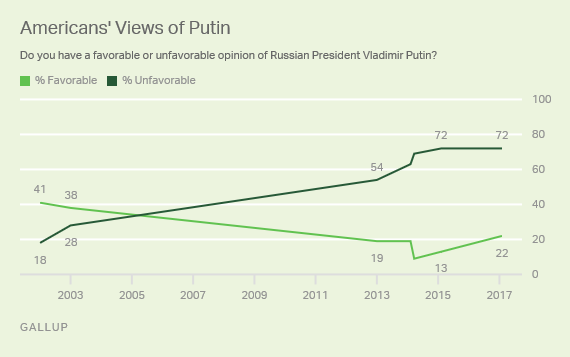 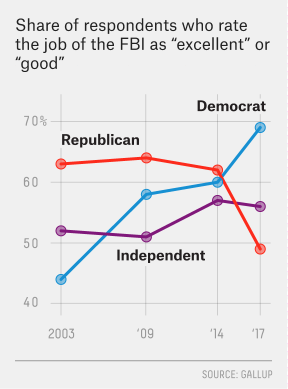 USING OREOS TO LEARN ABOUT COMMUNICATING AND RECALIBRATING BELIEFS
Pretty versatile for a cookie, right?

In Thinking in Bets, in a section about our difficulty tying results to decisions, I mentioned Oreo cookies and referred to them as “developed by the same person who invented SnackWell’s.”

I received an email from Tomas Stone, a reader of the book (who happens also to be an alum of St. Paul’s, my high school!), who questioned my belief about the inventor of Oreos. “One assertion you made, that the same person developed SnackWell’s as Oreos (p.86) seems unlikely to me. Oreos were introduced in 1912, SnackWell’s 80 years later, in 1992.” He cited Wikipedia, which has a detailed, comprehensively footnoted history of the Oreo.

I panicked upon reading this. I literally devoted a whole section in the book to commonly “known” facts that aren’t true, like how to predict baldness or the ratio of human-to-dog years.

Did I make the same mistake, in print, memorialized forever?

It turns out the truth, as it often does, lies somewhere in between Tomas’ belief and mine. Yes, Oreos were invented in 1912, but a scientist at Nabisco, Sam Porcello, later became known as “Mr. Oreo” because of the five patents he had related to Oreos, including the formula for the crème filling. He didn’t invent Oreos, but he had significant responsibility for developing the cookie we know today. There’s not much dispute that he “invented” SnackWell’s – though, again, we’re not talking about a one-person operation.

Tomas gave me permission to include our exchange in the newsletter. As I told him, “I think it’s a great example of how neither person in a conversation is necessarily ‘right’ and through exchanging ideas, both people can moderate their beliefs.”

Thanks to Tomas, I resolved in the future to say, “Oreos crème filling was invented by the same person who invented SnackWell’s.” Even that has been subject to updating. I had thought the 1912 Oreo was a biscuit, and Porcello’s invention was the crème filling. Upon further further review, it seems most likely that Oreos started as two wafers with crème filling (as did Sunshine’s “Hydrox” cookies, which debuted in 1908), but Porcello invented the modern formula for the filling.

A GREAT DISCUSSION BETWEEN MICHAEL MAUBOUSSIN AND SHANE PARRISH
No surprise there!

Shane Parrish (@FarnamStreet) just had Michael Mauboussin (@MJMauboussin) back on Farnam Street’s Podcast: The Knowledge Project. As I’ve mentioned on Twitter and in prior editions of the newsletter, anything Mauboussin has to say about decision making is worth listening to. And his book, The Success Equation, is a must-read.

Speaking of must-read, the Farnam Street Blog is a tremendous resource for learning about the ideas that shape decision science and the people responsible for them. The Parrish-Mauboussin discussion exceeded my high expectations.

Both Parrish and Mauboussin are avid readers so, at a minimum, you’ll find the chat loaded with reading recommendations. At one point – not even the main part of their discussion about books – Parrish asked, “what book do you give away the most to other people?” Mauboussin responded that he usually gives away a trio of books: Steven Pinker’s How the Mind Works, E.O. Wilson’s Consilience, and Louis Menand’s The Metaphysical Club. “I usually give these to younger people. For a 20-year-old kid, those are the three.”

Thank you, Michael and Shane, for reminding me about the brilliance of Consilience. Consilience – the general concept and its exploration by Wilson – is about the power of evidence from differing, unrelated sources and disciplines converging on the same conclusion. Even if the evidence from any single source is weak, if multiple independent sources converge to the same answer, the conclusion is viewed as strong.  Evolution is a powerful example of consilience.

This idea of convergence is an incredibly influential concept and, for a young person going out into the world, an important book to read on the way to becoming a better thinker. 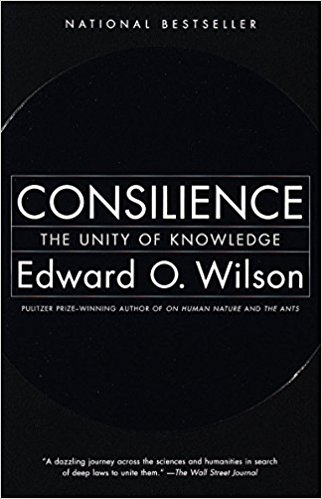 One of the reasons I follow developments involving free-speech on college campuses, and the mission of Heterodox Academy (@HdxAcademy), is that openness to diverse and dissenting views has importance beyond college campuses and beyond academics and science. In all decision making, access to other perspectives improves decision quality. Whether it’s coming up with a range of probabilities or anticipating things that can go wrong, we need to hear from people who have other viewpoints.

Check out these two videos. They are six-and-a-half minutes well spent. 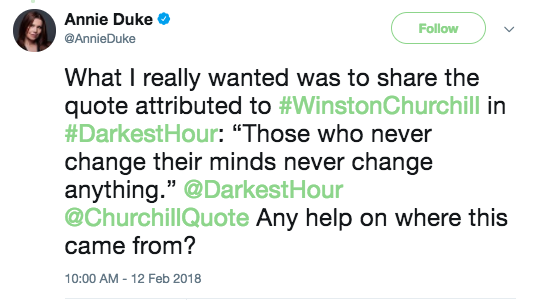 TWO WELL-WORN SITCOM TROPES CONFIRMED BY SCIENCE
What’s next? Proof that our quirky neighbor is from another galaxy?

Open on soul-sucking office. Desks, chairs, people, etc. – whatever. Dim, possibly buzzing fluorescent lighting tells us all we need to know. According to recent research reported by @ScienceDaily, “Does dim light make us dumber?”, the answer is yes. “Spending too much time in dimly lit rooms and offices may actually change the brain’s structure and hurt one’s ability to remember and learn, indicates groundbreaking research by neuroscientists.”