Last week @ScienceMagazine published a large-scale investigation of how information spreads on Twitter. The study spanned Twitter’s entire history, covering 125,000 rumor cascades. The primary conclusion, heavily reported, was that “falsehood diffused significantly farther, faster, deeper, and more broadly than the truth in all categories of information.”

Hearing is believing. The faster pace of information dissemination just magnifies this aspect of human behavior.

As Daniel Gilbert famously wrote in 1991, “People are credulous creatures who find it very easy to believe and very difficult to doubt.”

Good news from the study: we have the tools for vetting information for accuracy. There are, I’m sure, some ingenious lies circulating online, but looking at stats of the user account that the information came from is a first step:

CONFIRMATION BIAS ON DISPLAY
We are subject to it, but should we advertise it as a job skill?

Following Gary Cohn’s resignation as Trump’s top economic advisor on March 6, one of the names floated as a possible replacement was Peter Navarro.

This quote from Navarro, in an interview with Bloomberg.com, got a lot of attention on Twitter this week:

A lot of folks weighed on this rather unorthodox view of an economic advisor’s job.

I think @AdamMGrant really got to the heart of it here: 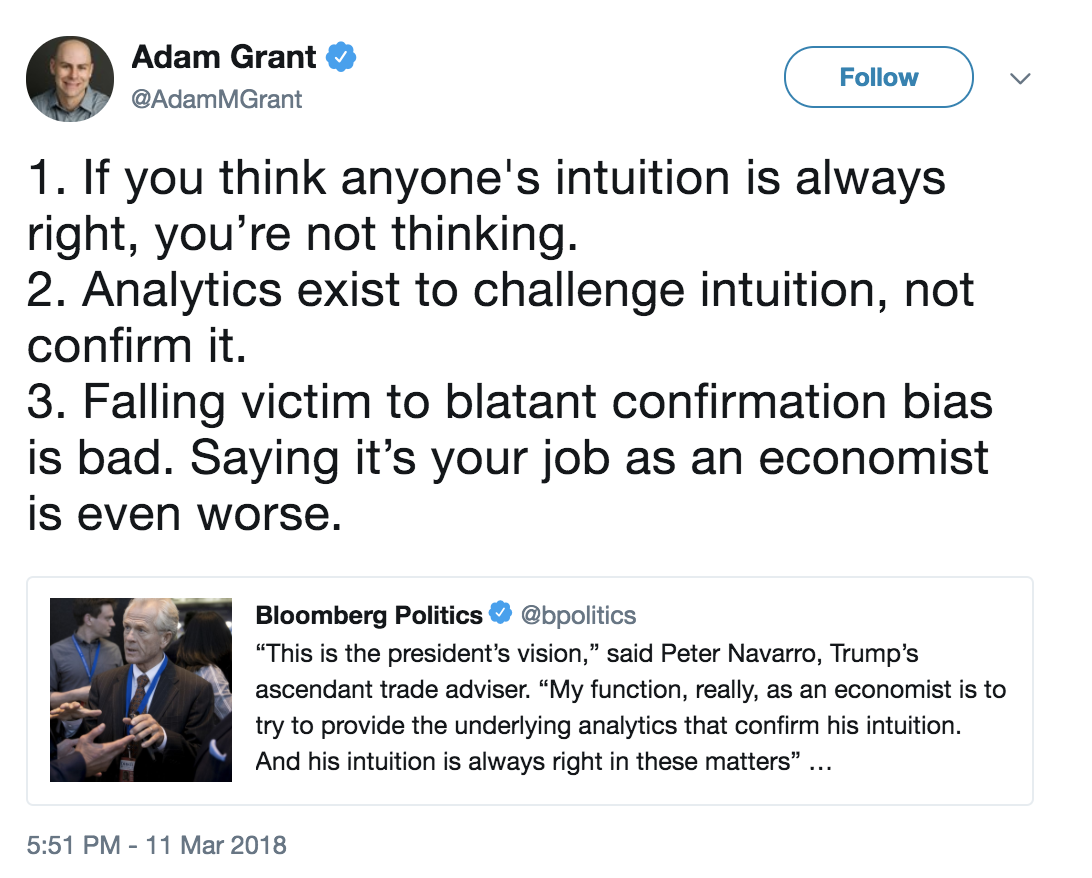 TILT ON DISPLAY
The good news: when you tilt all over the national news, everybody wants to help

Last week, the nation got to experience “The Full Nunberg,” a spectacular display oftilt on the national stage.

The back story: Sam Nunberg was (briefly) a Trump campaign aide until August of 2015. Last week he received a subpoena from special counsel Robert Mueller. That subpoena clearly sent Nunberg on tilt and, if you followed the cable news shows (and one local one) on Monday, March 5, you certainly got to see what tilt looks like.

@BrianStelter recapped Nunberg’s appearances in his @CNN “Reliable Sources” newsletter that night and in a story the next morning, “Sam Nunberg goes dark on Tuesday after his spectacular media meltdown.” You can watch his TV appearances on YouTube, but he showed off the subpoena, told an interviewer “let [Mueller] arrest me,” and generally raised concerns about his mental health and whether he was under the influence of drugs or alcohol.

No one shut off the cameras to the news story playing out in their presence, but people present tried to help him. Several interviewers reminded him of the legal jeopardy he was placing himself in, and a guest on MSNBC “made a compelling case” to him to cooperate with Mueller.

The CNN story mentioned that he shared his frustrations on the news “because he ‘got very aggravated.’”

By the next morning, he stopped doing interviews and started listening to his lawyer.

By Friday, he was appearing before the grand jury.

There are a lot of decision errors that take a long time to play out or spot. Tilt, in contrast, lights us up so everybody can spot it. The downside of tilt is that someone can do a lot of damage before others can talk you down. Nunberg’s situation was easy to spot and – it appears – repair before causing him irreparable damage.

I’ve been keeping my eye on the developing debate about free speech on college campuses.

@JeffreyASachs, a postdoctoral fellow in international studies at Simon Fraser University in British Columbia, posted a series of tweets on March 9, declaring “There Is No Campus Free Speech Crisis: An Unreasonably Long Thread.”

The thread cites GSS data on responses to “Stouffer Questions” (“should ____ be allowed to speak”) on students’ attitudes toward disinviting speakers and tolerance for views with which they disagree.

That data shows a surprising result, given how much this topic has been in the news: students are more tolerant, in general, than older Americans.

@JonHaidt immediately picked up the gauntlet. He promised to reply further after reviewing the datasets but noted three points for discussion.

The beginning of this debate makes for a great read. And I’m excited to see what is coming next from Haidt. Apart from the overall importance of the debate about free speech on college campuses, this debate also does two things: it’s a great model for how to disagree without being disagreeable, and it highlights that data doesn’t exist in a vacuum. It’s dependent on human beings collecting it, analyzing, and interpreting the results.

Here are the three main points that Haidt previews: 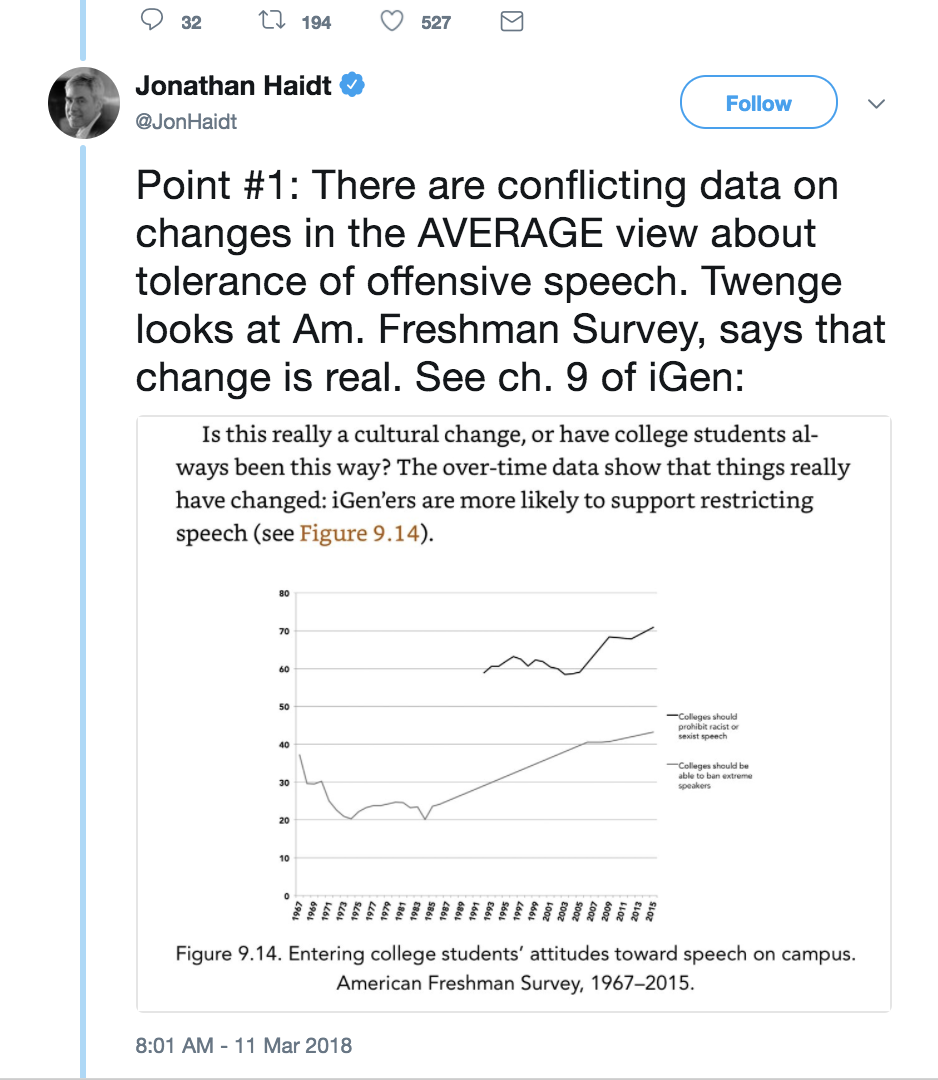 That shouldn’t be surprising. For any issue, it’s possible to find studies supporting different sides. You can find studies, for example, that gun control reduces crime and other studies for the proposition that it increases crime. It’s important to look across studies. This is why we have meta-analysis.

2. Haidt points out that, while it is important how tolerant students are of other people’s speech, there is another important question to ask which is not addressed in the Sachs thread. That question is how comfortable students feel expressing dissenting or controversial viewpoints. 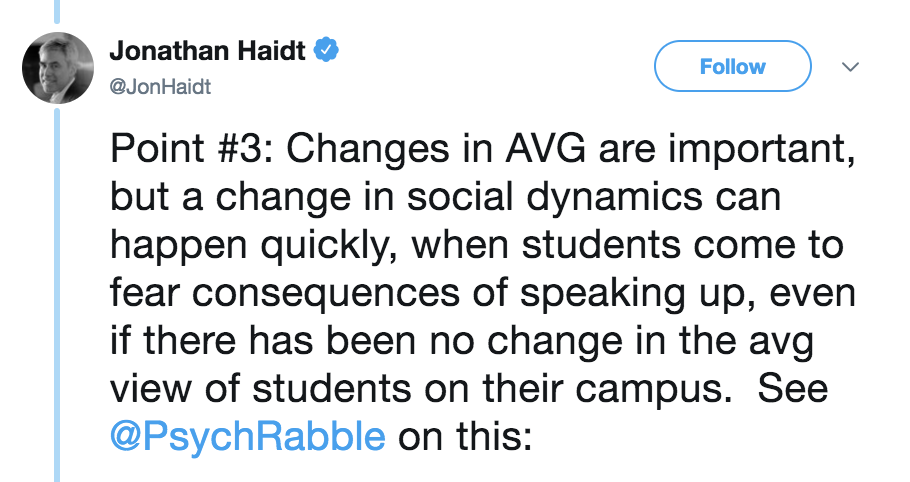 There can be a chilling effect on people’s willingness to express dissenting viewpoints, even if the average student is tolerant of hearing dissenting views from other people.

3. If the vast majority of students are tolerant of dissenting views, you might wonder why we’d even need to ask whether people feel uncomfortable speaking up. Haidt previews this by pointing out that an intolerant minority can create a chilling effect on the majority. 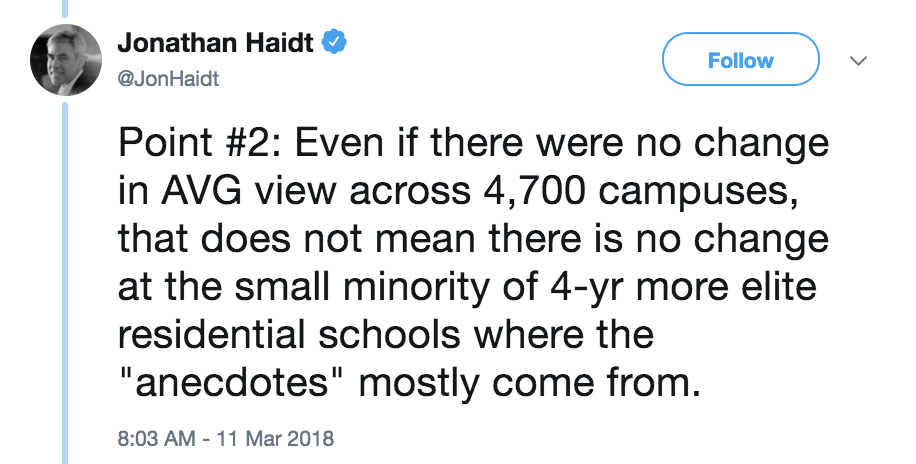 To take this problem further, Haidt cites fellow @HdxAcademy cofounder Lee Jussim’s (@PsychRabble), deeper dive into how a minority can control the majority. 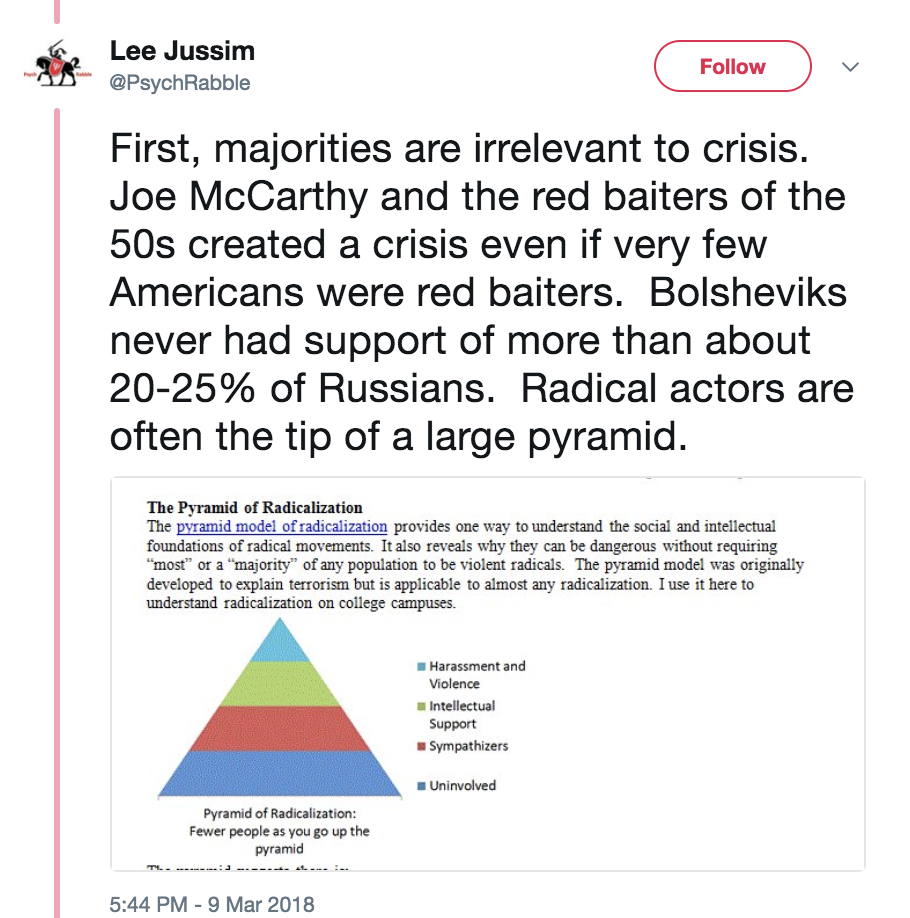 This bring us to a point that I think is relevant that Nassim Taleb made in Skin in the Game.

HOW DO YOU END UP WITH MINORITY RULE?
How much intolerance is enough to create a free speech crisis?

@NNTaleb’s Skin in the Game devotes a chapter to the subject of how small, intractable minorities can control policy. Love or hate Taleb’s style – few seem neutral by now – he offers a persuasive case for how a small minority can impose its preferences on the majority, even when the majority doesn’t share those preferences. (An earlier version of the chapter appeared on @Medium in 2016, “The Most Intolerant Wins: The Dictatorship of the Small Minority.”)

This occurs when there’s a particular type of asymmetry: a small minority that is inflexible, against a majority that is flexible or relatively indifferent to the position on which the minority is immovable.

He gives a simple example of kosher laws: if you have a dinner party where you invite 20 people and 1 eats only kosher, that guest’s preferences control the menu even though that guest is only 5% of the party. Why? Because there is an asymmetry. The kosher guest will not eat non-kosher foods, but the other guests are happy to eat either kind of food.

You can see how this can translate to politics. Within either party, Republican or Democratic, you may have 10% of party voters insisting on a purity test, with the other 90% willing to vote for the party’s candidate regardless. If the politician knows 90% will vote for them anyway, they may cater to the policy preference of the 10%. This is how a minority can determine policy for the majority.

Is campus free speech such an issue? I’m guessing that Haidt will argue that it is. I’m looking forward to seeing where the debate goes.

MY APPEARANCE ON THE ART OF MANLINESS PODCAST

I had an in-depth discussion this week on The Art of Manliness Podcast, with Brett McKay. We talked about several aspects of Thinking in Bets and behavioral issues underlying many current events and controversies. The website lists several of the items we covered: 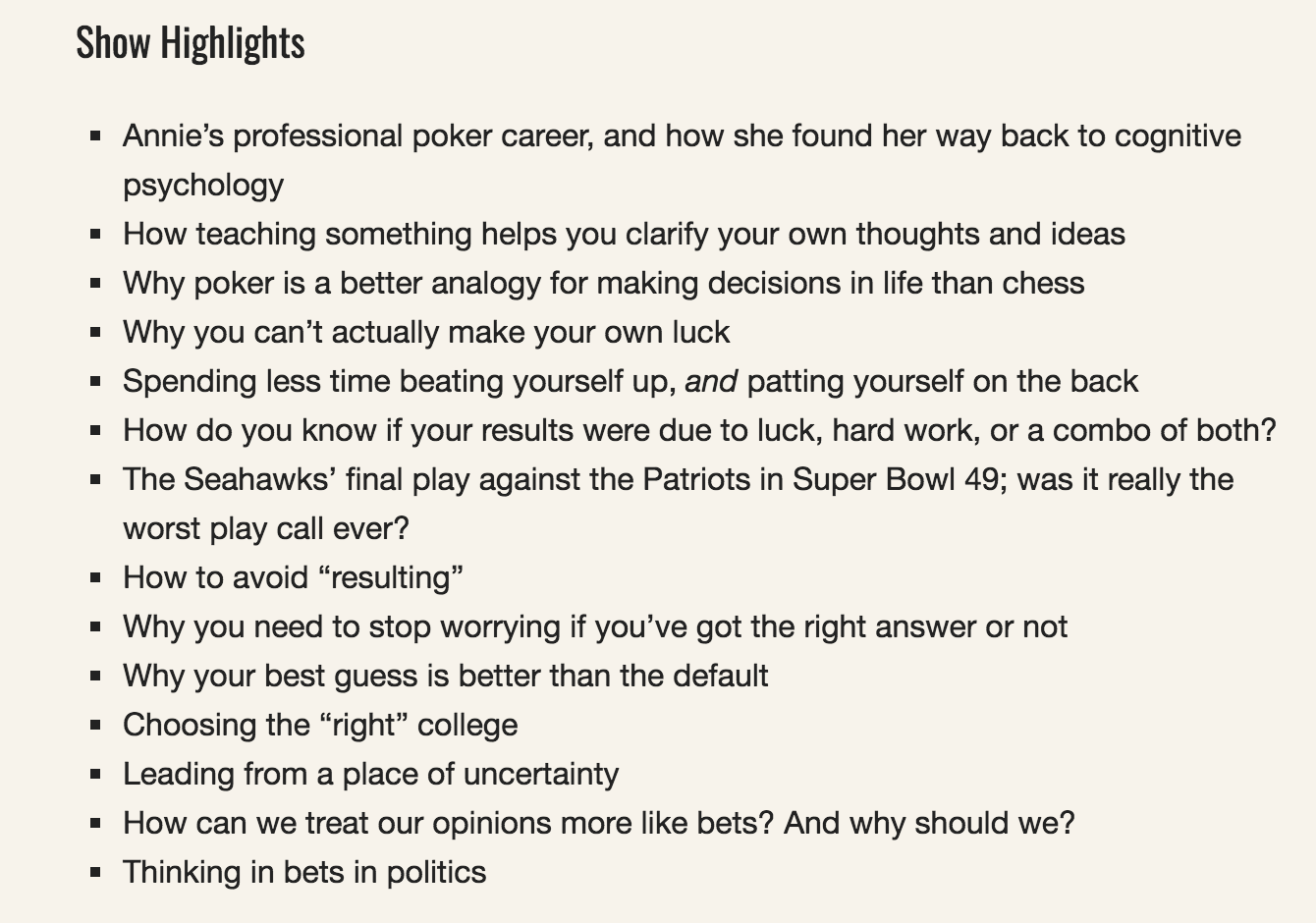 Last week, @MarketWatch posted an article I wrote about the importance of premortems in investment planning. Two planning strategies I recommend in Thinking in Bets are using backcasts and premortems. In both, you do some time traveling to the future, imagining that the outcome of the decision has already happened (positive in a backcast, negative in a premortem). You then work through what happened to get you to the outcome.

Because of that, premortems are frequently neglected as a planning strategy which is a shame because premortems allow for better stress testing, poking at the likely points of failure in a plan.