For several days, @ElonMusk attempted to come up with ways to rescue the children and their coach trapped in the cave in Thailand.

In multiple threads on his Twitter account, you can read about innovative methods of potentially rescuing the group, including a child-sized transport submarine and an inflatable tube. (See this @Wired article for a summary of his ideas.)

Musk and his team never got the chance to implement any of those ideas because he couldn’t overcome one particular obstacle: the bottleneck of time.

Other problems with his possible solutions aside, even if the solutions were perfect the boys were running out of oxygen and needed to be rescued more quickly than Musk could manage.

As fast as Musk was moving, he couldn’t build and transport his solutions fast enough to outrun the dwindling oxygen.

That got me thinking about the problem of bottlenecks.

Whether it’s in our business or personal lives, we all run into bottlenecks. They are a problem, like many other problems we need to address on the way to reaching our goals.

But not all problems are created equal.

Unless we properly identify (and somehow address) the bottlenecks, our planning and work on any issues that those bottlenecks impede can end up being wasted.

Apple’s first twenty-five years (1975-2000) are a classic example of how bottlenecks can undermine, prevent, and even reverse success. That period was a series of repeated booms and busts for the company, often because of an inability to solve for bottlenecks.

As Apple’s products (mainly computers) earned a loyal following for design and ease of use, its success was periodically capped by repeated shortages of component parts (like memory chips or disk drives).

Certain bottleneck problems may be difficult or impossible to solve.

And sometimes you figure out that a bottleneck cannot be solved, which allows you to cut your losses.

TANKING, TRUSTING THE PROCESS, AND TEAM BUILDING
An NFL perspective (with examples in the NBA) …
… And a bottleneck issue!

I highly recommend Joseph Ferraiola’s (@NFLDraftJoey) piece on team-building in the NFL in @ITPylon, “Which Process to Trust?”

“Tanking,” as a strategy in professional sports, means tearing down a team, trading its marketable veteran players to free up salary cap space, and weathering a period during which the team performs poorly so that it can eventually win.

The goal is to reap the long-term benefits of accumulating high draft picks and exchanging the team’s reliable veterans for speculative, high-upside future players (and/or more high draft picks).

Tearing down and starting over is a drastic strategy. But when a franchise is so far out of contention, it’s unlikely incremental changes will get you a superstar team.

Tanking can be a better strategy to reach the championship level, illustrated by several recent examples.

The last two MLB champions, the Cubs and the Astros, rebuilt themselves into perennial contenders.

The Philadelphia 76ers appear to be the most recent example of an NBA team tanking its way back into contention. (It did, however, take a long time – too long for its architect, Sam Hinkie, to survive with the team to reap the rewards.)

As @NFLDraftJoey nicely lays out, tanking isn’t a one-size-fits-all strategy across professional sports.

And one of the things that can make tanking not such a good strategy has to do with bottlenecks.

The NFL has a bottleneck of sorts at the quarterback position. Few teams have had sustained success without a great quarterback.

That suggests that it doesn’t so much matter how good the rest of the team is. If the quarterback isn’t great, it’s hard to keep winning.

That sure sounds like the definition of a bottleneck.

Compare this to the NBA. Basketball doesn’t have the same kind of bottleneck at a particular position.

Success in the NBA frequently depends on the talents of a unique player, but that pool isn’t further limited by that player’s position.

For example, you can identify numerous instances of dominant NBA teams anchored by a great center. But your ability to build a great team doesn’t require solving the bottleneck of the rarity of seven-foot-tall athletes capable of excelling simultaneously in feats of strength, speed, agility, endurance, coordination, and shooting touch.

In 1984, the Houston Rockets, drafting first, picked such a player in Hakeem Olajuwon – and did pretty well for the next decade-plus.

In the same year, the Chicago Bulls, drafting third, arguably had a greater need for a center than the Rockets, but took guard Michael Jordan and built a team around him that won six championships. They used numerous centers on those teams, none of whom they had to stake their future on.

And today’s best player, LeBron James, a forward, has been the foundation of teams reaching the last eight NBA Finals.

The article illustrates the difficulty of successfully tanking in the NFL without addressing the QB bottleneck (as well has how to address the bottleneck without tanking), by contrasting the approaches of the Cleveland Browns and the Philadelphia Eagles.

Their fans are, understandably, sick of so much losing and their patience is running out as the franchise hasn’t been able to capitalize yet on the tanking strategy.

But if you are trying to address the QB bottleneck, it isn’t so much to give up.

The article quotes a lengthy exchange at a sports analytics conference involving Eagles EVP Howie Roseman. With their 7-9 record, the Eagles were on the outer fringes of contention.

Giving up so much to pick one quarterback had obvious risks, but it addressed the team’s biggest need.

The Browns, in contrast, had trouble pulling the trigger on Wentz. He didn’t come from an elite college program and all those picks they received in exchange helped them improve their future prospects at many positions.

But two years later, and still doing very little winning, the Browns found themselves taking the same gamble they had tried to avoid in 2016: they used their top pick in the 2018 draft on one, risky, high-profile quarterback, Baker Mayfield.

COMMUNICATION BREAKDOWN –
And what we’re doing about it
(Thanks, Ed Lewis!)

When we communicate probability and uncertainty, we run the risk of adding confusion if we aren’t specific. As I mentioned in last week’s newsletter, Andrew Mauboussin (@amaub) and @MJMauboussin documented, in a recent issue of @HarvardBiz, the different meanings people give terms such as “likely.” (You can also take their survey and see for yourself!)

Some groups of professionals – like tax attorneys – have dealt with this issue by standardizing what they mean when they use specific language. Ed Lewis forwarded the HBR link to his daughter, a corporate tax attorney, and was kind enough to email me her response, along with his permission to share it:

“For tax attorneys, we have precise words that we must use in a tax opinion to avoid this exact issue.

If we give an opinion, where we say the result “will be” this, it means we are saying we think there is a 90% to 95% probability of the position being sustained.

If we say “should be”, it means we think there is at least a 75% probability.

If we say “more likely than not,” it means we think there is more than a 50% probability.

If we say there is “substantial authority” for a position, it means we think there is a 50% to 30% probability.

If we say there is a “reasonable basis” for the position, it means we think there is a 30% probability.”

The GM of a large warehouse was told that their primary forklift had a totally exhausted old battery. On the way to work the next day he bought a new battery and placed it in the bed of his pickup.

When he arrived in his office he hollered down to one of the warehouse men, “Go get the battery out of my truck and install it in the forklift.”

It turned out that the forklift worked just fine afterwards. At the end of the day, however, the GM’s truck would not start.

Needless to say, the new battery was still in the truck’s bed.

Thank you, Ed, for sharing. I love having the opportunity to learn (and then share) additional information on specific fields and approaches to decision making from readers.

MAKE IT (POTENTIALLY) RAIN
What does a 20%-chance-of-rain mean?
Communication breakdance, part 2

Even if there is an exact meaning to a probability we express, it doesn’t mean everyone knows that meaning. There are certain cases where expressing probability as an exact percentage can still be confusing because the probability is open to many interpretations.

@JasonZweigWSJ underlined this point nicely when he tweeted this: 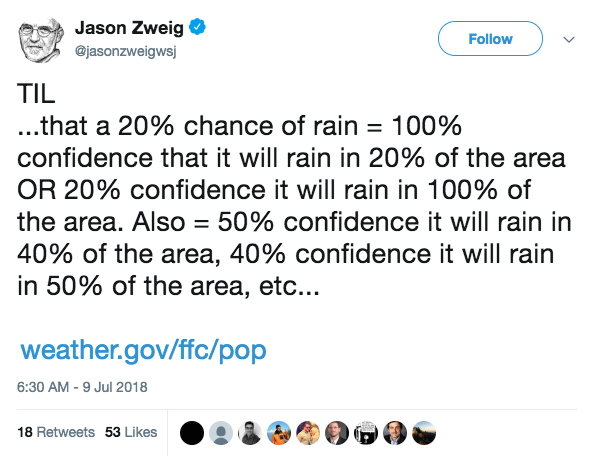 Here are some interpretations:

Of course, we can conquer all those communication problems about probability and uncertainty and STILL mess up when we interpret those statements as applying only to other people. This was one of many beautiful explanations in Bob Seawright’s (@RPSeawright) “Above the Market” post titled, “Proof Negative.”

We crave the closed (certain) system where the future can be perfectly predicted, but we live in the universe, which is an open (uncertain) system.

We can infer potential outcomes, but we can’t deduce them.

We have to make do with uncertainty, and that makes us uncomfortable.

Philosophical and psychological issues aside, that discomfort is dangerous when it motivates us to misinterpret or ignore information designed to help us make decisions.

You should really read the whole article. It’s all worth emphasizing.

The really important takeaway is that we want and expect proof positive, but we often have to settle for and rely on proof negative, and it doesn’t resonate with us very well.

THANKS FOR THE KIND WORDS BY MARC ANDREESSEN
And welcome back to Twitter!

Marc Andreessen (@PMarca), legendary venture-capital investor, has made news over the past couple of years by his absence from Twitter. Consequently, his return to Twitter last week was widely noticed in circles encompassing business, venture investing, Silicon Valley, and social media.

Thanks to his already-high visibility and the additional interest in anything coming from his Twitter account after the long absence, his initial tweets were likely to receive widespread attention.

It was my good luck that Thinking in Bets was the subject of his fourth tweet back from the wilderness: 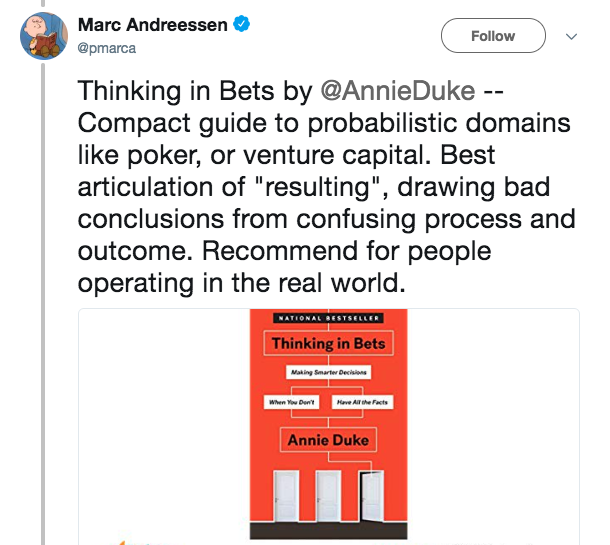 Glad you enjoyed it, and thank you!

THIS WEEK’S ILLUSION: THE BULGING CHECKERBOARD
Thanks to Michael Bach, h/t @AkiyoshiKitaoka

The bulge is an illusion, which you can see by going to the version on the websiteand removing the ticks in the corner of the squares. 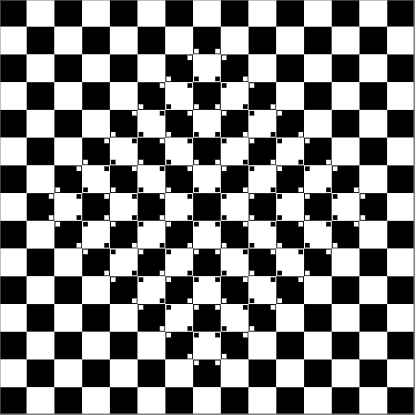