“No, judges don’t give harsher sentences when they are hungry”— Annie’s Newsletter, October 5, 2018

NO, JUDGES DON’T GIVE HARSHER SENTENCES WHEN THEY ARE HUNGRY
How a sexy narrative can make us forget that correlation does not equal causation

Ego depletion is the hypothesis that willpower and self-control are limited resources that diminish with use, like when we exercise or resist a plate of cookies or do hard math problems.

The original result that kicked off the ego-depletion hypothesis came from Roy Baumeister, et. al. in 1998 showing that people who are forced to resist a plate of cookies give up on solving hard puzzles more quickly.

Other results followed including a famous study showing that willpower could be replenished with sugary drinks.

Break down and eat a pint of ice cream at the end of the day? Ego Depletion!

Eat that huge muffin after working out? Ego Depletion!

It turns out, though, that many of the more famous ego depletion studies don’t replicate.

One of the more well-publicized studies found that judges issued harsher sentences right before lunch.

“Judges’ Rulings Are Harsher When They Are Hungrier“ declared just one headline describing the findings.

Shai Danziger and colleagues took data from 1,112 parole decisions by Israeli judges. They found “the likelihood of a favorable ruling is greater at the very beginning of the work day or after a food break than later in the sequence of cases.”

What followed was the prescriptive advice that simply taking a food break “may lead judges to rule differently in cases with similar legal characteristics.”

That fit neatly with the then-hot concept of ego depletion.

But a subsequent paper by Keren Weinshall-Margel and John Shapard revealed a much more mundane explanation for the harsher sentencing: prisoners without lawyers receive parole at a much lower rate.

Defendants without representation have their hearings scheduled at the end of sessions, before breaks.

No one is questioning the data collection of the original research. The correlation was based on facts (the dispositions and the time of day of the dispositions) ascertainable with a high degree of certainty.

The conclusion of ego depletion (in this case the judges being hungry), however, was not a fact. It was an inference of what caused the correlation between time of day and how the judges granted or denied parole.

It takes a person to interpret data. The fact of the correlation between sentencing and lunchtime does not mean the conclusion that hungry judges give harsher sentences is true.

Facts inform the truth but they are not, themselves, the truth.

Khan Academy has a great video on the subject, “Correlation and causality,” created by Salman Khan. He made the video after publication of a study about how teens eating breakfast were more active and had lower levels of obesity, leading to the prescriptive advice that feeding kids breakfast would lower obesity rates.

Khan goes through all the reasons why the correlation isn’t necessarily proof of a causal relationship.

For example, physical activity could be the causal factor. It could be that activity and lower body fat caused more teens to eat breakfast.

Or it could be some other factor causing all these things, like sleep patterns. That should sound like when those who lack legal representation come before a judge causing the correlation between lunchtime and sentencing.

Ego depletion as narrative is a sexy explanation. This is a good lesson in understanding the need to poke around correlations for other explanations (or the possibility the correlation is spurious).

And we should be extra-cautious when we see a correlation fitting into a narrative that we really want to believe.

“MOVE!” – OR NOT?
A reminder about action bias in sports and decision-making

Doing something is better than doing nothing, right?

Not so fast, as this great piece on action bias by Randy Sherman, “Action Bias Pitfalls,” reminds us.

(If you obsessively prepare and practice, you can’t be accused of insufficient effort.)

Action, practice, and movement likely are good approaches in sports (and in other domains) but more isn’t uniformly better and sometimes may even reduce success.

Sherman gives an example I used in an earlier newsletter, from the HBR article by Francesca Gino and Bradley Staats, of how soccer goalies who don’t dive left or right are more likely to stop penalty kicks.

He also points out, using another soccer example, how focusing on action (in the form of miles covered) can lead us to overlook the things that actually interfere with success.

“In soccer for example there is a tendency to applaud distance covered and praise a team for covering many miles during a match. A team is said to be ‘robbed’ when they have a higher work rate yet lose the match. The paradox would say they’ve lost sight of how a match is won – by scoring more goals than your opponent. Not (necessarily) by outrunning them.”

This reminds me of the difference between speed and velocity that Shane Parrishwrites so eloquently about on Farnam Street:

“Speed is the distance traveled over time. I can run around in circles with a lot of speed and cover several miles that way, but I’m not getting anywhere. Velocity measures displacement. It’s direction-aware.

Speed is being fast for the sake of being fast. Velocity is directional. It gets you to where you want to go.

We often mistake speed for velocity, thinking that any movement is good. But directionless movement is just wasted energy.

The distance a team has covered on the field is speed. How well you move to increase the probability of scoring is velocity.

Sherman’s article also includes a very good checklist. It’s from a sports perspective, but easily adaptable to other domains:

We know that tribalism drives how we process information.

And attitudes about Brett Kavanaugh before and after the Ford-Kavanaugh testimony did not disappoint as political affiliation drove attitudes and minds did not change.

A poll by YouGov.com after the hearing found (not surprisingly) polarization along party lines about who was telling the truth. It also showed that basically very little changed in those beliefs before and after the hearings.

The YouGov.com article about the poll is titled, “Deep polarization in reactions to Ford-Kavanaugh hearings,” and that’s its point: there’s polarization. 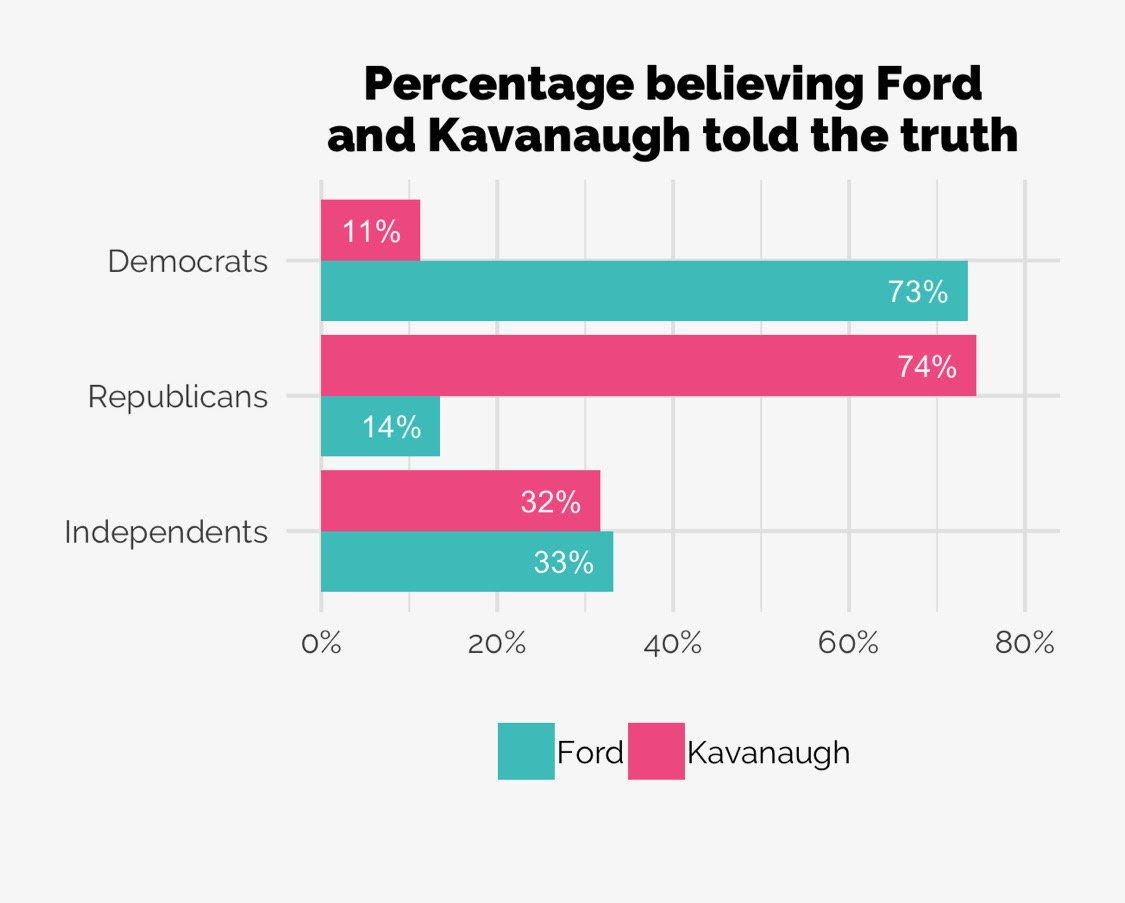 The media reported this to mean that the hearings themselves did not change any minds.

This is not necessarily wrong. But it is not something you can conclude from the poll.

The Washington Examiner, for example, reported the poll results under the headline, “Shock poll: Few opinions changed by Kavanaugh hearing.” The article says the hearing “surprisingly changed few minds,” interpreted as “a sign that political partisanship is more powerful than the testimony.”

Crucially, the poll itself doesn’t break down results based on whether people actually watched the testimony vs. hearing or reading about the testimony second-hand or seeing selected clips of the testimony curated by the media.

(You can explore the data and find that 58% of respondents watched “any” of the hearing, but does not break down if there were differences between people who watched and people who didn’t.)

Knowing whether those who actually watched the testimony changed their minds more than those who heard about it second-hand or not at all would also help us understand more about how tribe drives the way we process information.

It may well be that the tail is wagging the dog.

It may be that political tribe completely drove interpretation of the testimony.

But we can’t say that for sure from this data.

HOW DO WE BALANCE INTUITION AND INSPIRATION WITH PROBABILISTIC THINKING?
Liv Boeree’s TED Talk puts them nicely in perspective

Liv Boeree gave an excellent TED Talk on three lessons she has learned from poker about decision making.

Don’t get too focused on short-term results. We have a hard time distinguishing between skill and luck in individual outcomes, and we overestimate our skill after good outcomes.

Get used to quantifying beliefs. If we put percentages on beliefs, it helps in planning and digging down into things that affect the likelihood of a decision working out.

We shouldn’t ignore intuitions, but we shouldn’t overprivilege them when we have the opportunity to analyze things properly. Intuition is good for things where we have a lot of experience and a detailed analysis is impractical, like whether we can fit our car into a parking spot.

In those moments, experience translates into intuition (and it does it quickly).

On the other hand, if we’re deciding on something like a career path, our “gut feeling” should take a backseat to a careful look at the potential options, outcomes, and probabilities.

She concluded the talk by adapting three generic Facebook inspirational memes to reflect the three lessons.

She also tweeted the memes: 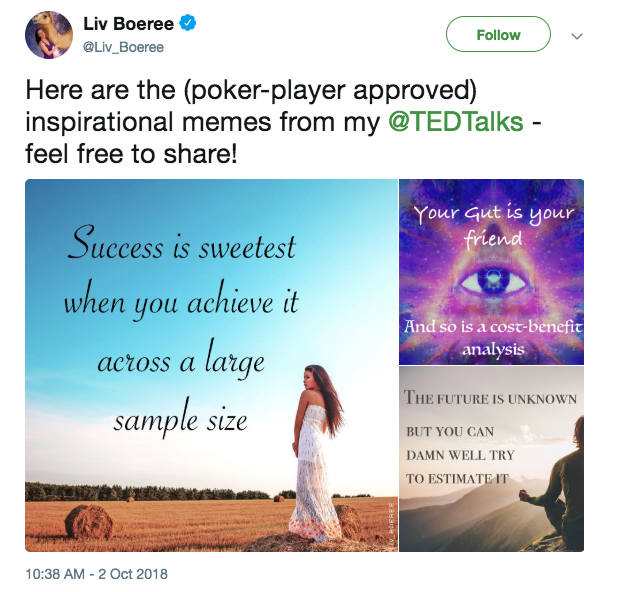 It was a great talk, loaded with examples and humor. If you check it out, it will be six minutes well spent.

The dots making up all four hearts are the same color: 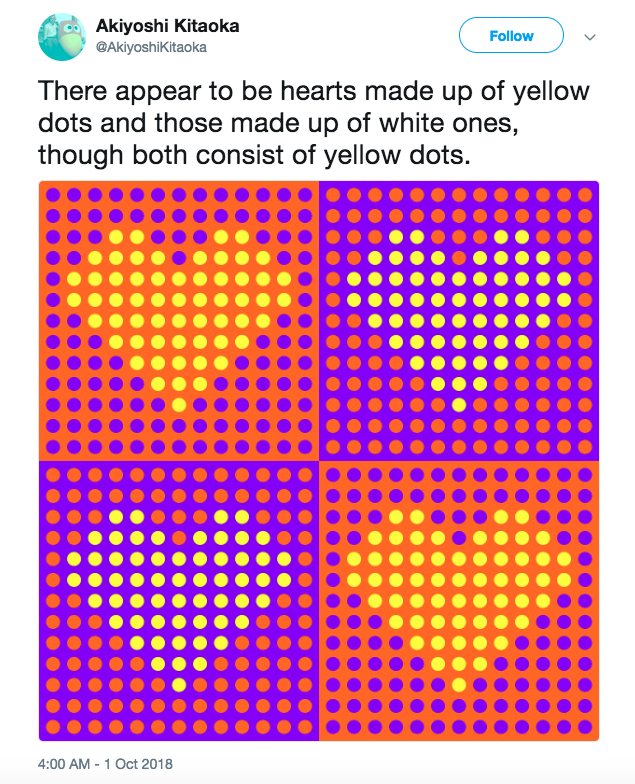