THE PHILLY SPECIAL
Eagles’ coach Doug Pederson made some great coaching moves, but what made them special was that they worked

Congratulations to my Philadelphia Eagles and their entire organization on a stunning, exciting victory over the New England Patriots in Super Bowl LII. Eagles’ coach Doug Pederson has received widespread praise – well deserved – for his in-game strategy. (@NYTimes, two days before the game, featured a piece about the commitment throughout the organization to analytics and probabilistic thinking.)

ESPN called Pederson’s coaching performance, “nothing less than the gutsiest coaching job in Super Bowl history.” To us Eagles’ fans, that could be viewed as an understatement of Pederson’s genius and contribution.

To ESPN (and most analyses of Super Bowl LII strategy), Exhibit A was “the Philly Special,” called by Pederson on fourth down at the New England one-yard line near the end of the first half. The conventional play would have been to kick a short field goal. Instead, Pederson made two bold decisions: he went for it on fourth down, and he called for a trick play, the Philly Special, which called for quarterback Nick Foles to catch a pass in the end zone from tight end Trey Burton. The play worked, giving the Eagles a ten-point halftime lead.

That play and the reaction to it turns out to be a great parallel to how I opened my book, Thinking in Bets. In the Super Bowl in 2015, Seattle Seahawks coach Pete Carroll made a big against-expectations call on the one-yard line. Despite the levels of sophisticated thinking behind the play, it failed, leading to a victory-sealing interception by the Patriots. The headlines the next day screamed, “WORST PLAY IN SUPER BOWL HISTORY.”

Two similarly unexpected, creative, and mathematically well-reasoned play-calls. Two different outcomes. High praise for the one that worked, condemnation of the one that didn’t. The reactions reveal a common decision trap: resulting, judging the quality of a decision by relying on the quality of its outcome, despite the significant intervening element of luck in the way any decision turns out.
Judging a decision only by its outcome is the wrong approach in football—and in life.

The outcome of Super Bowl LII is a shining moment for Philadelphia, and for me as an Eagles fan. It is worth remembering, though, that while Doug Pederson’s genius will not fade, neither should Pete Carroll’s.

ORIGIN OF SPECIOUS
(The pithier title, “Evolution of a Misquotation,” was taken)

On February 6, Publication Day for Thinking in Bets, a reader of one of my tweets reminded me of several of my own lessons, including the importance of vetting of our beliefs and the benefits of embracing our mistakes. This all started on January 29, when my weekly #MondayMotivation tweet was this quote: “In the long history of humankind (and animal kind, too) those who learned to collaborate and improvise most effectively have prevailed.” I was looking for quotes about the importance of collaboration (another Thinking in Bets message), saw on Goodreads that it had been attributed to Charles Darwin, and posted it with one of those greeting-card-style images of the quote.

Harold Jarche (who I don’t know but learned from Jarche.com that he speaks and consults on helping individuals and groups “adapt to the technological, demographic, and societal changes facing us today”) tweeted on February 6: 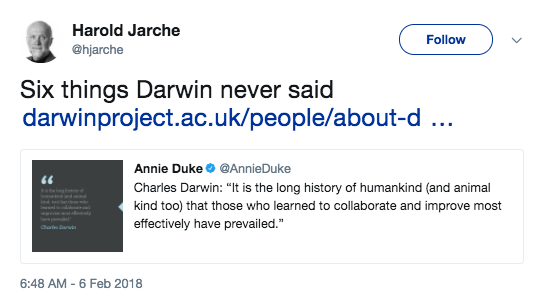 I had fallen into the kind of cognitive trap that I warn against: believing something simply because we hear or read it. I looked quickly at his source, the University of Cambridge’s Darwin Correspondence Project (@MyDearDarwin), which was as high-credibility as it sounds. The article on the site, “Six things Darwin never said – and one he did,” includes the quote I used, noting, “Supposedly from Descent of Man. So far no one has found where it really comes from – but it definitely isn’t Darwin.” 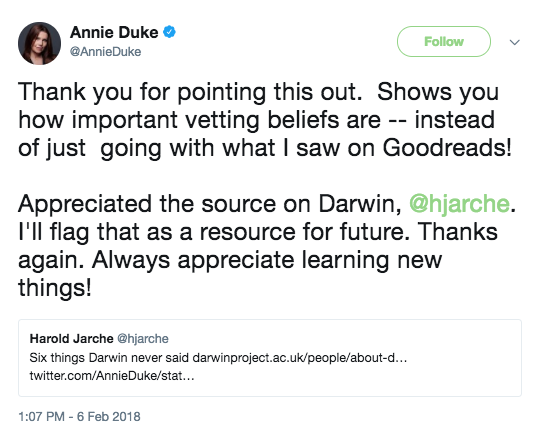 I spent a while little browsing the Darwin Correspondence Project’s website. It’s a marvelous place to get lost, tracing Charles Darwin’s life and works through thousands of pieces of correspondence on matters monumental and mundane.

The first thing I learned, though, was how frequently Darwin is misquoted. In addition to the other Darwin quotes pointed out in that article, there’s a separate article about how one non-Darwin quote is, literally, set in stone. The California Academy of Science has a quote – different from the one I used but another one widely attributed to Darwin – etched into its floor. The quotation remains, but they subsequently removed the attribution to Darwin. I appreciate that CAS decided it was better to fix their mistake than to make the whole thing disappear.

I found a picture of the quote at the CAS from the blog of Colin Purrington (@ColinPurrington), who writes about nature photography and evolution-related projects. He told the story of the quote and had even photographed it on the floor of the CAS, prior to them removing the Darwin attribution: 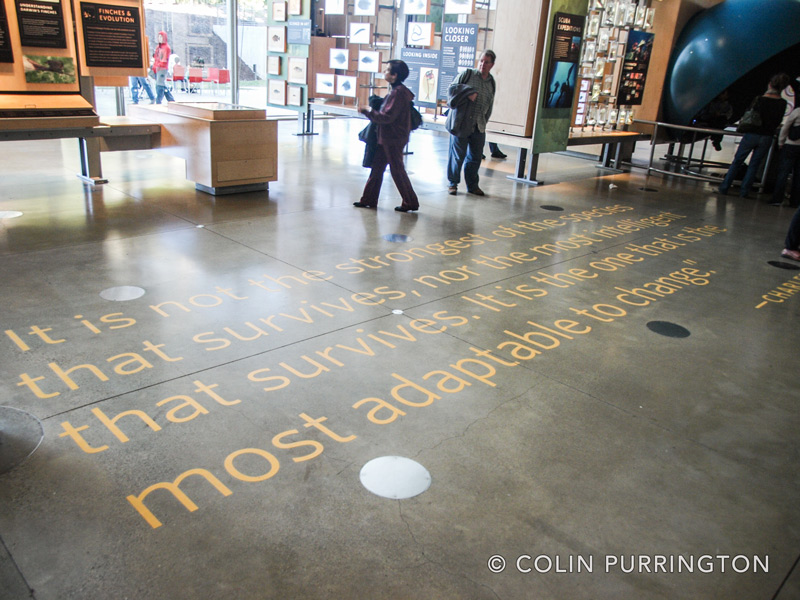 OH, AND MY BOOK CAME OUT

Tuesday was also release day for Thinking in Bets. I wrote the book to make a contribution to the conversation about decision-making and critical thinking, so I appreciate the opportunities I’ve had to discuss those ideas in lots of new forums. Here are a few of those conversations: