Reader, friend, and career military officer Rick Jones asked –
So we came up with something

Rick Jones, a reader of my newsletter, initiated an email correspondence with me to share his interest (and talent) in seeking inspirational, practical concepts for difficult situations. He graciously gave me permission to share our conversation about uncertainty.

I learned a ton from the exchange and, hopefully, you will too.

His initial question was about whether we could think about uncertainty in the same way we think about friction.

In particular, he was interested in the idea that since we can’t eliminate all friction (the force that prevents action), we must learn to accept that friction exists and punch through it.

To explain, he offered this great passage on friction abridged from U.S. Marine Corps FMFM-1:

“Friction is the force that resists all action. It makes the easy difficult, and the difficult seemingly impossible.

Whatever form it takes, friction will always have a psychological as well as physical impact.

While we should attempt to minimize self-induced friction, the greater requirement is to fight effectively within the medium of friction. The means to overcome friction is the will; we prevail over friction through persistent strength of mind and spirit.” (Emphasis added.)

When Rick was on active duty, he and many others considered this passage to be elegant, concise, powerful, and motivating in addressing a difficult, pervasive problem.

He asked if there was a single concept we could likewise apply to the difficult, pervasive problem of uncertainty.

In my reply, I suggested the possibility that the “single characteristic that is essential to punch through uncertainty is the acceptance of uncertainty.”

We treat certainty as a goal and act like it’s attainable. That illusion causes all sorts of problems: we convince ourselves that we are certain when we are not; we fall into analysis paralysis; and beat ourselves up when things don’t work out, in part because of resulting and hindsight bias.

Rick agreed in principle about the importance of acceptance of uncertainty, but had reservations about that being the basis for something both concise and inspiring:

“The thing about ‘acceptance’ that I am not 100% happy with, though, is that it seems a bit too passive … almost fatalistic. … As a career military officer, I lean toward decisiveness. … How does a leader convey confidence in a course of action while at the same time acknowledging the uncertainty inherent to the decision that led to the course of action?”

His critique was dead on in terms of the way I had expressed it as passive.

I suggested we were in a similar place but had to iron out the language to make it more active, giving him several alternatives to “acceptance,” the last of which was

“Embracing uncertainty? I use embrace a lot actually and it is much more active, as you point out. Grab hold if it and give it a huge hug because in doing so you find real decisiveness.“

He had supplied a framework for a friction-type passage on uncertainty. I plugged in “embracing uncertainty” and we discussed and made additional modifications.

I think we got to a really good place with this:

“While we should work to reduce uncertainty in our decision making, the greater requirement is to embrace uncertainty and to make the best possible decisions in the face of it. The means of doing this is to probabilize the future; we prevail over uncertainty through having the most accurate map of what lies ahead of us and making our decisions accordingly.”

The flip side of processing fluency

In the Nov. 2 edition of the newsletter, I talked about how processing fluency can make things feel more true and more likeable. (“Why a Good Truth is Hard to Find,” parts I and II.)

As I summarized there,

There’s a flip side to processing fluency: ways that a lack of clarity can make a message feel much deeper.

It’s “the Guru Effect,” and Steve Stewart-Williams tweeted about it, coincidentally, on the day I published the newsletter about politicians traditionally succeeding with the opposite approach.

His tweet cited a 2010 article by Dan Sperber, “The Guru Effect.” As Sperber explains,

“Obscurity of expression is considered a flaw. Not so, however, in the speech and writing of intellectual gurus. All too often, what readers do is judge profound what they have failed to grasp. … [A] runaway phenomenon of overappreciation may take place.”

It’s an interesting way to think about the goal of a communicator: spreading their message. You can go about it two ways, each representing one end of the processing-fluency range.

If you want to be a successful politician, you could make your message simple and repeat it, increasing how much people like what you are saying.

If you want to be a guru, you could make your message obtuse and complicated, increasing the how much people will think your message is deeply profound.

That can be a risky way to go, but the whole point of being a guru is that you’re supposed to be delivering some truth that other people can’t see. That means that the message can’t, by definition, be easy to understand or simple.

A good guru is hard to understand.

When we “rate” – rather than consume – news items, that changes the rules of the game …
(… in favor of accuracy over confirmation)

Fake news is a big problem without a clear solution.

Humans aren’t good at spotting it, particularly when the news agrees with our point of view.

So what do we do?

Part of the solution might be to Yelp our news.

Patricia Moravec and colleagues published a paper on the positive effect (from a truth-seeking perspective) on users when they rate articles on believability instead of just reading them as usual.

“We found that, while users were generally more likely to believe articles that agreed with their point of view, asking users to rate pushed them to think more critically about the truthfulness of the articles. Moreover, once users had been asked to rate some articles, they remained critical of other articles as well, even without the rating prompt.”

In the usual way we consume information, our beliefs are in the driver’s seat. We tend to process information to make it fit with (and, as a consequence, reinforce) our existing beliefs.

The goal of the news-reading game isn’t really about finding out what is objectively true. It’s about reinforcing that what we already believe is true.

What these researchers did was change the goal of the news-reading game.

And while the authors of this study focused on “mindfulness in social media consumption,” I think there is another reason for the debiasing effects of changing the game from the news-reading game to the news-rating game.

Rating the articles shifts the goal from being right to being accurate because it gives readers skin in the game.

Raters were betting their reputations on their accuracy since, while not explicit in the study, I think it’s a fair assumption that the raters assumed they would be judged on their ratings.

Anna Dreber, whose work I’ve referred to in Thinking in Bets and in several newsletters, shows that betting markets outperform experts because it creates skin in the game. Likewise with Phil Tetlock’s work on forecasting competitions.

The more you make it explicit that you’re betting when you make a decision (or when you form an opinion), the more accurate you’ll be.

By getting people to rate the articles on believability, that makes it explicit that they are betting on their opinion (with their reputation) and that creates more accuracy.

(H/t Cass Sunstein for bringing the study to my attention.)

Activating the moral-emotional center of the brain gets you retweets.

A study by William Brady and colleagues at NYU (including Jay Van Bavel) found that using moral-emotional language significantly increased the spread of messages on social media:

“Using a large sample of social media communications about three polarizing moral/political issues (n=563,312), we observed that the presence of moral-emotional words in messages increased their diffusion by a factor of 20% for each additional word.”

Not surprisingly, they also found that this type of language amplifies the message only within a political tribe, not across tribes:

“We found that moral contagion was bounded by group membership; moral-emotional language increased diffusion more strongly within liberal and conservative networks, and less between them.”

We know, from the work of Jay Van Bavel and Andrea Pereira, that tribes satisfy five basic social needs:

“… belonging, distinctiveness, epistemic closure, access to power and resources, and they provide a framework for the endorsement of (moral) values.”

(I’m referring to their paper, “The partisan brain: An identity-based model of political belief,” which I wrote about in the Feb. 16 edition of the newsletter, “Identity Politics of a Different Sort” and which has heavily influenced my thinking about tribe.)

Because one of the things tribe offers us is a moral system, it makes sense that using moral-emotional language associated with our political group would activate in-group interest.

People in our own political tribe speak the same language. Using “the right” moral-emotional language lets a reader know that communicator is in our group.

You get less cross-pollination in terms of the spread, but it spreads more quickly within the group.

This, inadvertently, has become my “November 2 tribute edition.” In addition to the earlier references to “Why a Good Truth is Hard to Find,” that’s also the edition in which I wrote about “The Hidden Tribes Study,” the report from More in Common about the details of political polarization and bridging that divide.

Daniel Yudkin, the Associate Director of Research at More in Common, just wrote a piece in the New York Times, “The Psychology of Political Polarization,” a brief follow-up on Hidden Tribes.

Yudkin’s conclusion speaks to a consequence of what Brady, et al., found about messages with moral-emotional language spreading but not cross-pollinating:

Once we invoke tribal language, it becomes very hard to listen from across the aisle because we literally don’t understand what’s being said.

Because each side is speaking a different moral-emotional language, it’s hard for the other side to recognize areas of agreement.

We’re not speaking the same language.

This isn’t confined to politics. Groups commonly have their own jargon – surfers, poker players, bow hunters, dentists, sports-card collectors … everyone. That jargon signals membership in the group.

It also obscures what you’re saying to people outside the group.

That kind of language enhances status in the group, but it also makes you incomprehensible outside the group.

It’s the same for politics.

Invisible 8 in the eight of diamonds

I played poker for so long, but this tweet by Plink was the first time I noticed the invisible 8: 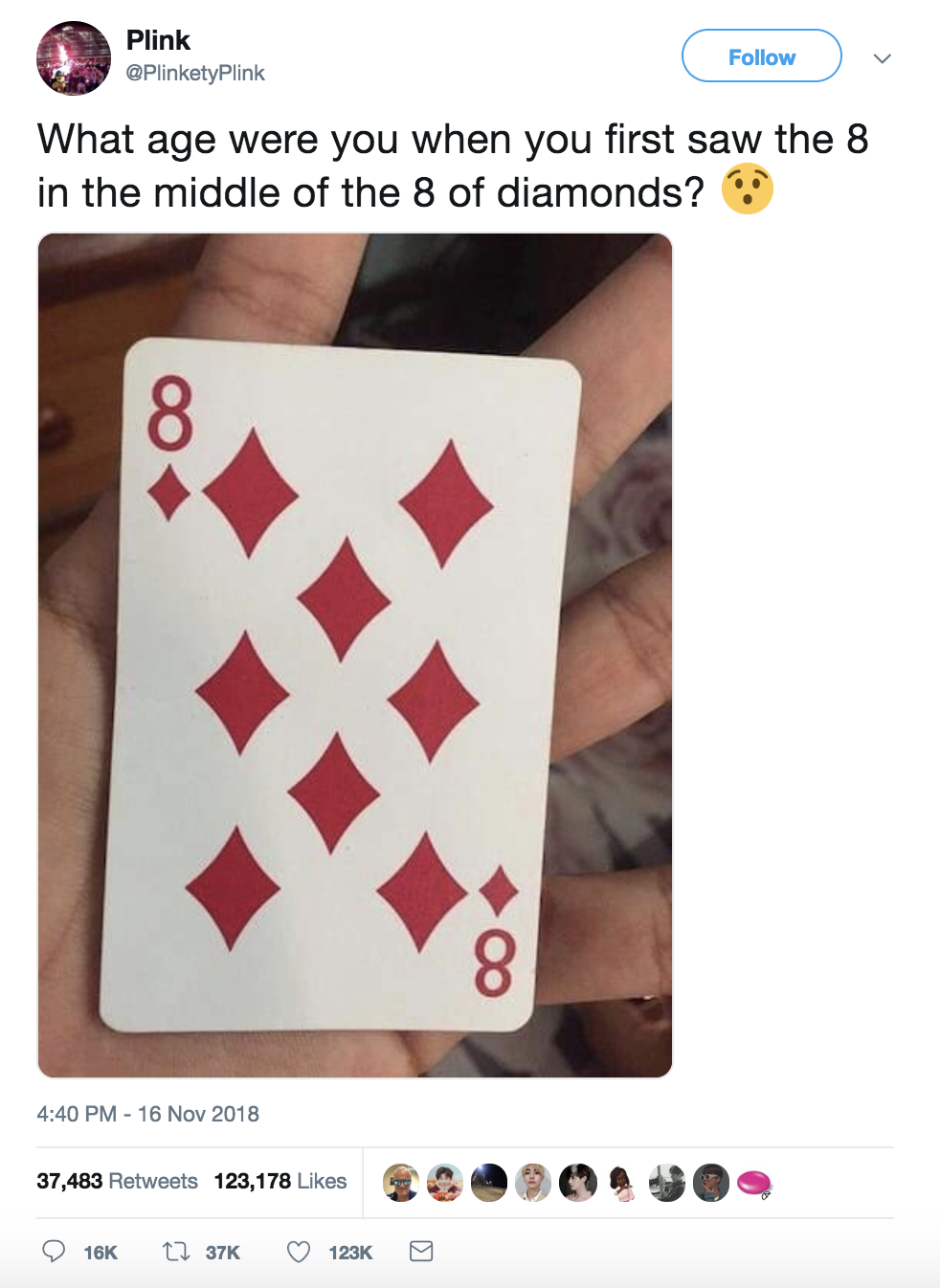 Based on the response to Plink’s tweet, as well as when I tweeted it, a lot of people were blind to it.