On Monday, Steven Pinker (@SAPinker) tweeted, “how much should the government pay to eliminate a disease that kills 6 Americans a year?” His question framed an approach to the terrorism debate taken in a @TIME piece, “Why We Shouldn’t Exaggerate the Scale of Terrorism,” by John Mueller, senior fellow at the Cato Institute (@CatoInstitute) and a political scientist at Ohio State. Mueller looks at the question of how much of our resources as a country we should allocate to the threat posed by jihadist terrorists from a cost-benefit analysis perspective. The death toll from terrorism makes it a relatively low risk compared to other ways an American might die (like drowning in a bathtub). Mueller argues that resource allocation should be commensurate with the threat. That is the crux of Pinker’s question when he asks how much we should allocate to prevent a disease that kills 6 people a year.

For insight into an opposing view, see this 2011 piece from @TheAtlantic  by Jeffrey Goldberg (@JeffreyGoldberg). In “A False Comparison Between Terror Deaths and Bathtub Deaths,“ he points out the unique downstream effects of terrorism that raise its priority as a government responsibility. 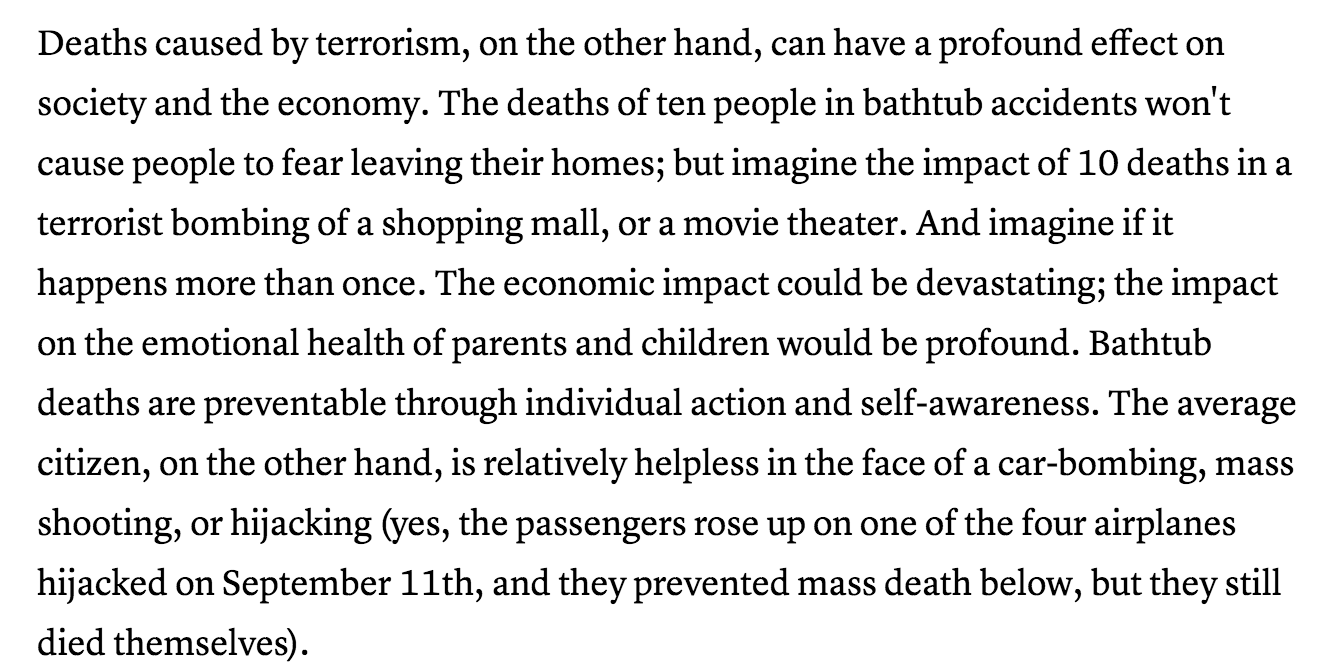 I agree that we need to take these downstream effects into account, but some of those effects actually stem from an emotional overreaction of fear to a statistically rare event. (This is more explicit in the reasoning in a @CNN commentary by former National Security Council Counterterrorism directors, Jennie M. Easterly and Joshua A. Geltzer, “More die in bathtubs than in terrorism. It’s still worth spending billions to fight it.”) In that sense, the reasoning feels a little circular to me. We react out of proportion to the size of the threat, so we respond to the overreaction by expending more resources to prevent the overreaction.

I think the more compelling argument in The Atlantic is that the threat of terrorism is much more volatile than threats like bathtub deaths, so it could pose a much greater risk than past data suggest. The number of people who die in a bathtub each year is unlikely to change much year over year, unlike terrorism which could spike if terrorists were to use, for example, a biological weapon or some other means of killing an unprecedented number of people. I see the point that, given the potential downside, it might make sense for the government to prioritize more resources toward prevention than 6 deaths a year might suggest we should.

*Full disclosure: I am publicly on the Mueller side of the debate as you can see from my contribution to this article by Michael Smerconish (@Smerconish) in the Philadelphia Inquirer (@PhillyDotCom), about factors that move decision processes from analytical to emotional. The December 2015 article was a review of a book co-written by John Mueller, Chasing Ghosts: The Policing of Terrorism.

Jay Van Bavel (@JayVanBavel), a social neuroscientist at @NYUPsych, live-tweeted “Social Chameleons,” a course he taught at NYU Abu Dhabi with @TessaWestNYU. The resources Van Bavel links to in the course provide an amazing starting point for anyone interested in learning more about “why we identify with groups, how groups shape our perceptions and behavior, and how we can influence the groups we belong to.” Given the political climate today, I would venture that any of us would do well to learn more on this topic.

The approach included perspectives from organizational behavior, political science, sociology, psychology, neuroscience, and evolutionary biology. Van Bavel’s tweets are a treasure trove of viewpoints and research, including the course description (from which I took the above summary), schedule and subjects, and links to papers and videos used throughout the course. I particularly recommend watching these two videos from the course:

Robb Willer’s talk on political conversations is one of several recent perspectives I’ve been collecting on this central decision-making issue facing us all: How do we bridge what seems to be a stubborn, entrenched chasm in our political views? Aspects of this issue come up in how we gather information on public issues, how we maintain (or avoid) civil discussions on those issues, and how we can find a way to reach consensus or otherwise make major policy decisions. Here are three additional recent pieces I’ve spotted:

IN PRAISE OF THE TYPEWRITER
A blunt instrument, yet capable of infinite nuance and delicacy

When passing through the San Francisco airport, I snapped a few images from their typewriter exhibit, which included typewriters used by Ray Bradbury, Orson Welles, and John Lennon. 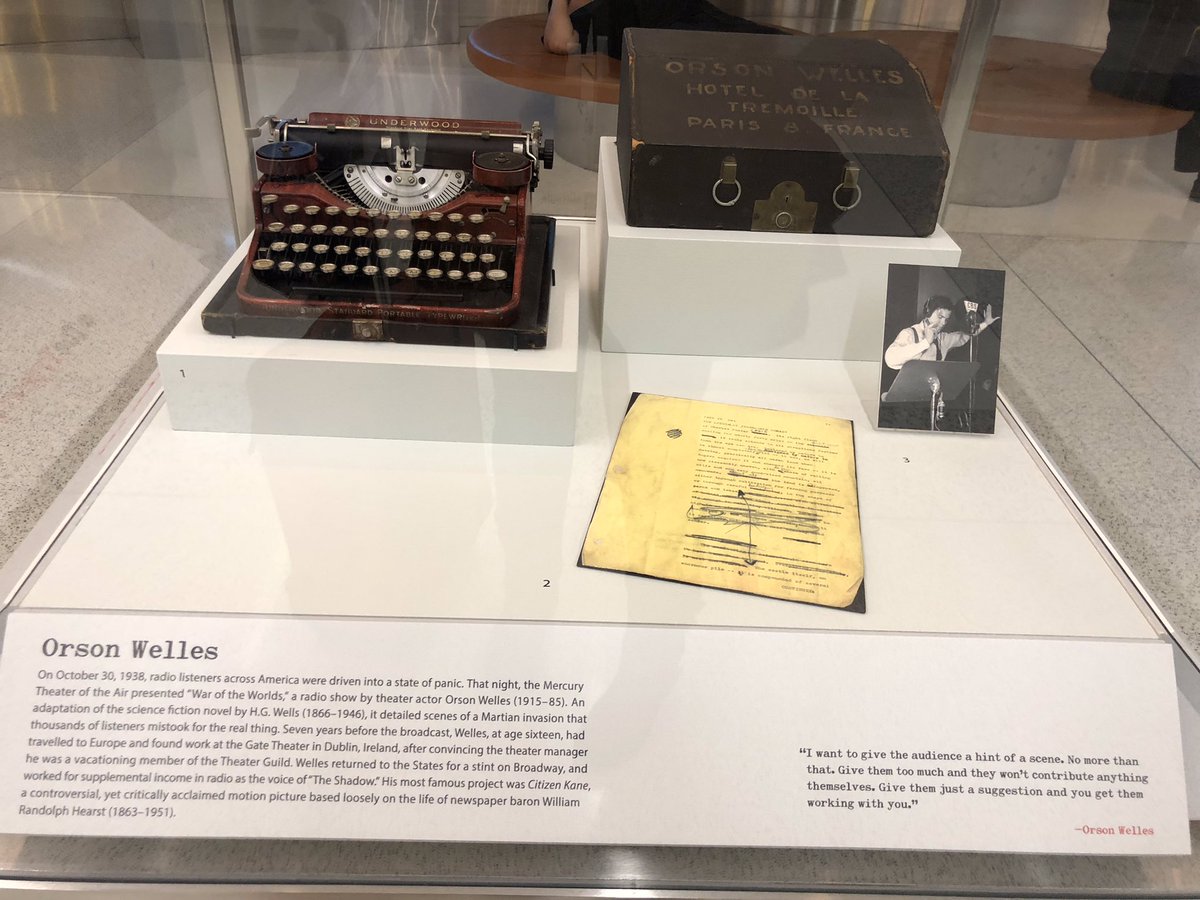 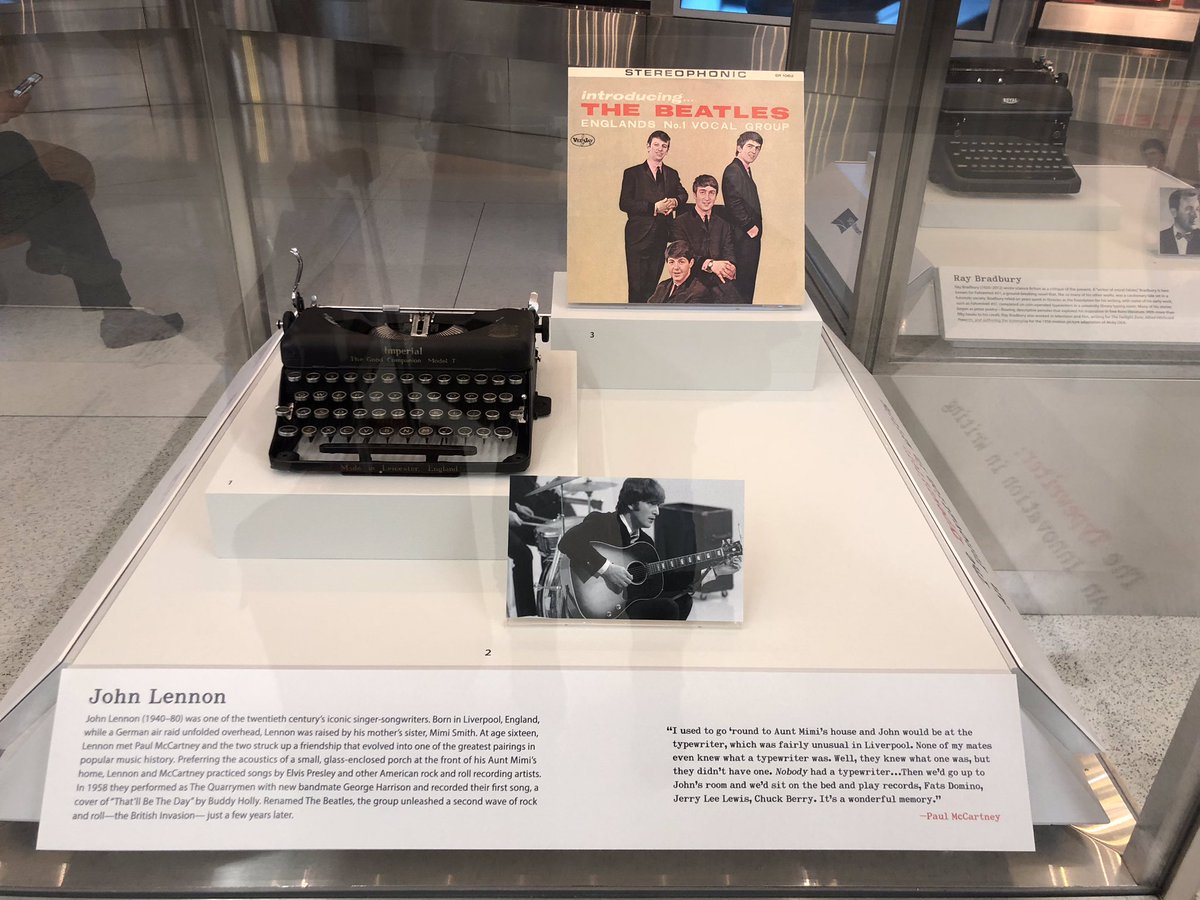 Technologically, we’ve moved beyond typewriters. But creatively, I can’t help but be inspired by this display of historic writing tools.

My book, Thinking in Bets, comes out on February 6. I draw on examples from business, sports, politics, and (of course) poker to share tools anyone can use to embrace uncertainty and make better decisions. 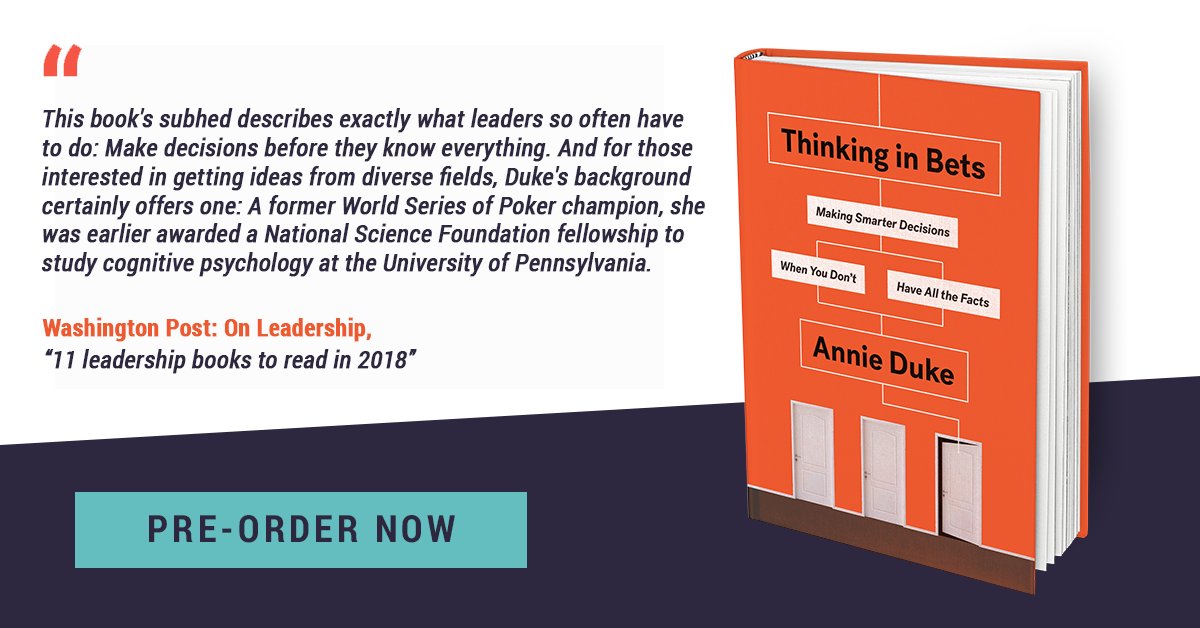