A TRIO OF UNLIKELY, BUT TRULY MAGICAL WORDS

You can now “Look Inside” Thinking in Bets on Amazon. In the table of contents, you’ll find a section in Chapter 1 titled, “’I’m not sure’: using uncertainty to our advantage.” You can even read some of the section (pp. 26-29), but Amazon’s preview omits page 28, so you’ll be correct that it feels like something is missing.

Here is the gist: We are taught to treat “I’m not sure” or “I don’t know” as strings of dirty words. Students who write “I’m not sure” as a test answer will get that answer marked wrong. Yet uncertainty in our beliefs and predictions is, quite simply, a more accurate representation of the state of our knowledge about, really, anything. We rarely have all the information needed to lodge a belief that we know to be 100% true and there is just too much luck in the way the future unfolds to be certain in our predictions of it.

An “I’m not sure” mindset motivates us to fill in the gaps in our own knowledge. What follows is that we become better at calibrating our beliefs and more open-minded to those who disagree.

So imagine how delighted I was when I saw this piece by astrophysicist and @NPR writer @AdamFrank4 and tweeted it on January 13: 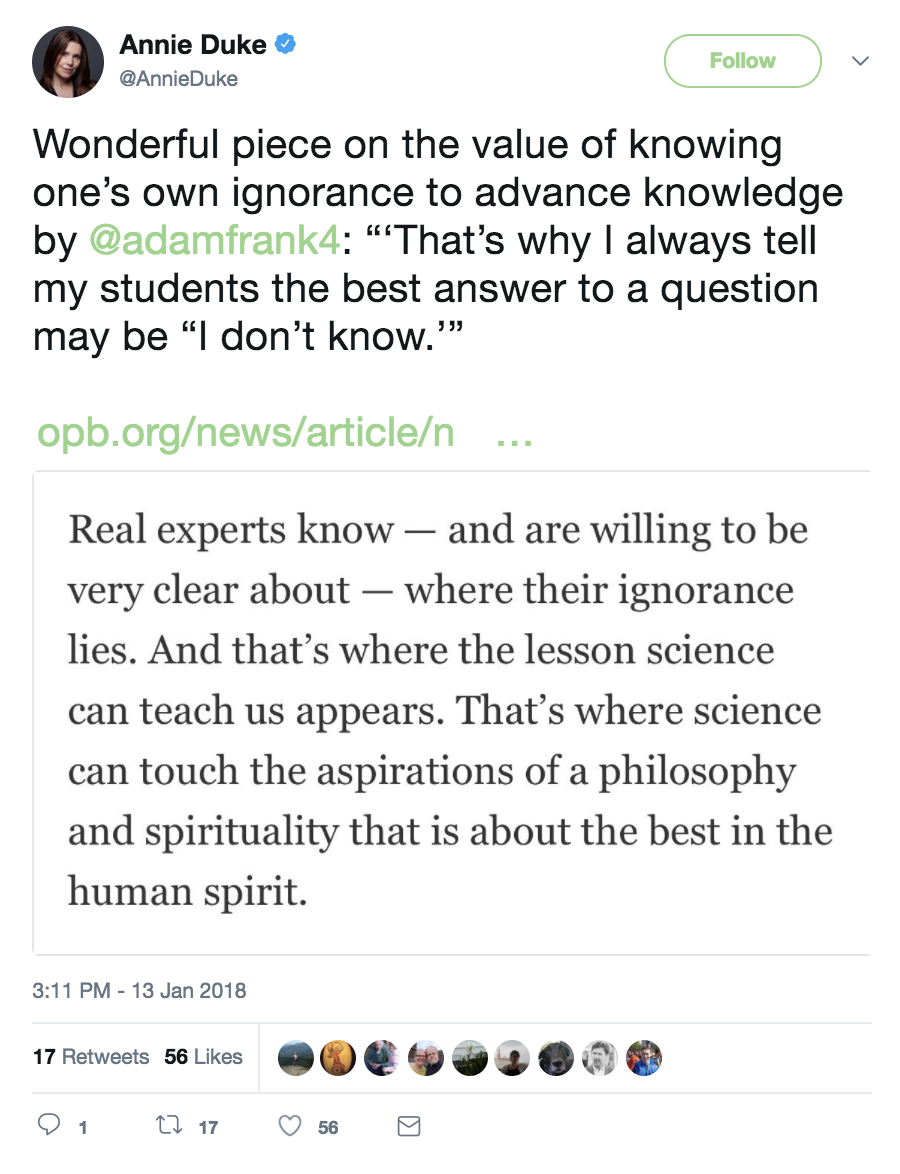 Likewise, I was pleased to see Rolf Degen (@DegenRolf) recently point to four studies supporting intellectual humility as, “a mighty antidote to the prevalent political bias and polarization.” 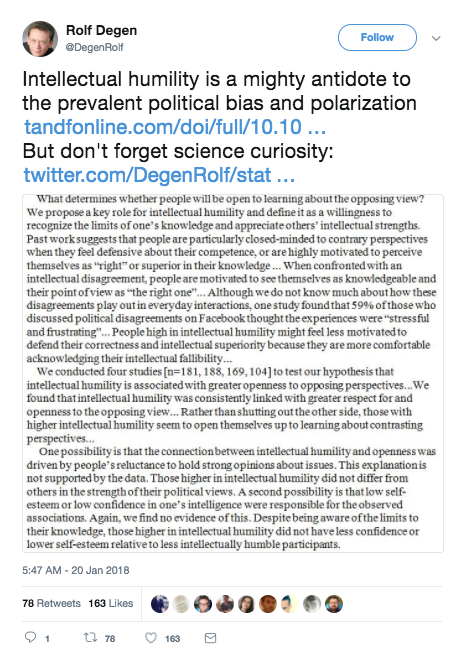 … and a few who regretted their vote

The New York Times got into the spirit of seeking out opposing viewpoints this week. The Times, obviously, has been very critical of Trump. On January 17, they turned their editorial page over to letters from fifteen Trump voters and supporters. The next day, they published letters from two people who voted for Trump but now regret it. Good for them for giving a platform to people who obviously disagree with their editorial stance. And good for the Trump voters who voiced their opinions in a place (and to an audience) they likely regarded as unfriendly.

You might have noted (as I did) the paucity of Trump mind-changers, and the 15-2 ratio of his voters who continue supporting him to those who no longer do. Given this was the New York Times, it’s reasonable to assume they wouldn’t sit on a pile of letters from Trump voters describing their regret. To anyone familiar with confirmation bias and motivated reasoning, this ratio should not be surprising.

BALANCE VS. ACCURACY IN PUNDITRY
Is 50/50 necessarily fair? 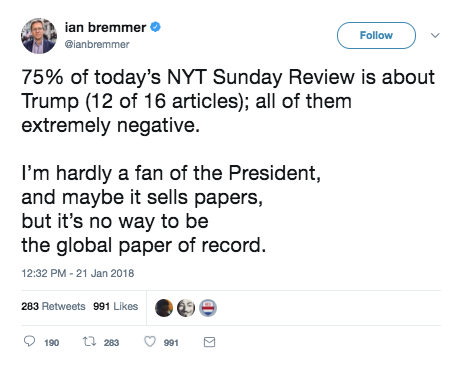 Phil Tetlock (@PTetlock) posted the tweet and explained why this point was worth considering:

Tetlock’s tweet attracted some super insightful replies that challenged the idea that unbiased coverage would necessarily be close to a 50/50 balance:

Tetlock posted several additional responses to these replies, including recognizing the similar potential for errors of “one-siderism” and “both-siderism:” 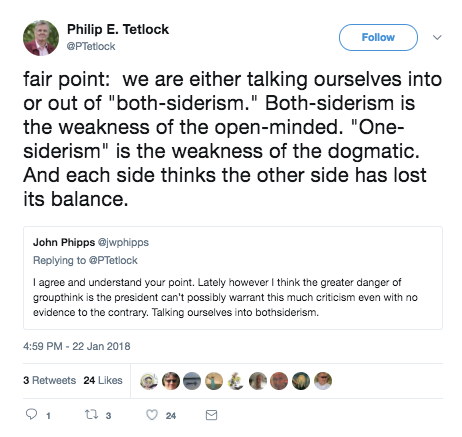 50/50 is merely a default, a proxy for fair coverage. But if both sides are not equally valid, 50/50 coverage isn’t actually fair because we would be over-representing one side in that case. That was the point of the tweet about tsunami coverage, which we can much more objectively assess as negative than the actions of a politician.

There’s a risk, in any kind of coverage – whether it’s 90% favorable, 90% unfavorable, or exactly 50/50 – that it is an inaccurate representation of the president’s performance. The default to an even split has the advantage of the appearance of fairness, which is attractive when the objectively accurate distribution is opaque.

COMPLEXITY BIAS
Humans and pigeons, connected (in a non-conspiracy sort of way)

Shane Parrish’s blog, Farnam Street, is loaded with challenging information and perspectives about decision-making issues. I recently tweeted about a highly informative piece he wrote about “complexity bias.” Complexity bias, as the name implies, concerns our irrationally favoring complex explanations over simple ones. He devotes considerable detail to summarizing the research findings about complexity bias, including (entertainingly) B.F. Skinner’s experiments with pigeons:

Our minds aren’t built for applying Occam’s Razor (that the simplest explanation is generally correct). Nor, apparently, are pigeons’. We evolved to link things together. That was all fine and good when our ancestors on the savannah were too quick to connect rustling sounds as an approaching lion rather than the wind. It’s not so great when complexity bias drives us to believe the moon landing was faked.

THE CODDLING OF THE AMERICAN MIND
Provocative article, upcoming book, and a chance to benefit FIRE

Jonathan Haidt (@JonHaidt) and Greg Lukianoff (@GLukianoff) are writing a new book, The Coddling of the American Mind: How Good Intentions and Bad Ideas Are Setting up a Generation for Failure. If you’ve read past editions of my newsletter or my Twitter, you know I’m interested in just about anything Haidt has to say. The book doesn’t come out until July 17, but it’s worth recommending early and often. First, the book developed out of an article of the same title, one of the best articles I’ve ever read in the Atlantic. Second, every book sale will benefit the Foundation for Individual Rights in Education (FIRE). Even better, if you order the book through this link, even more money goes to FIRE from Amazon. 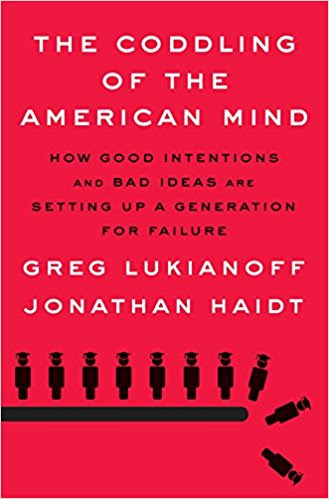