TURKEYS CAN FLY!
Are turkeys the suited connectors of the animal world?
A reader calibrates my belief with this YouTube video
(If there’s a WKRP in Cincinnati reboot in development, take note!)

In Thinking in Bets, I used a famous WKRP in Cincinnati episode to illustrate how the accuracy of our beliefs has serious consequences for our decisions. Because decisions are bets based on our beliefs, if our beliefs are not well calibrated, our bets will suffer.

In the WKRP episode, station manager Mr. Carlson, to prove he’s more than the owner’s son, launches a Thanksgiving turkey giveaway – literally – by throwing turkeys from a helicopter at a local mall. The turkeys, unable to fly, crash to the ground in a grizzly massacre. Back at the station, Mr. Carlson declares, “As God is my witness, I thought turkeys could fly!”

The point was, of course, that false beliefs can lead to some pretty dire consequences.

Well, leave it to one of my readers to let me know that my beliefs about turkeys needed some calibrating.

Don Causey sent me a note this week informing me that turkeys can, indeed, fly.

While domestic, over-fed turkeys of the type Mr. Carlson threw out of the helicopter do lose their ability to fly, wild turkeys can fly just fine.

In disbelief, I emailed him back, asking, “how well can they fly? If you tossed them out of a moving helicopter could they safely make it to the ground? Now so curious …”

He responded with a link to this YouTube video, “Flying wild turkeys.” It’s an amazing 18-second video. Those suckers really can fly!

The episode is a classic comic bit, but I suppose it’s better to know more. That episode could sink into your consciousness and years later, get you on the wrong side of a bet because you’re sure, somehow, even if you can’t remember the source, that all turkeys CANNOT fly.

I certainly had that belief.

Causey’s takeaway: “Maybe these birds are sort of like those suited connectors.”

Thank you, Don. My belief is now better calibrated.

TOO MUCH INFORMATION? WELCOME TO THE “REPUTATION AGE”
Challenges & risks to the shortcuts we must take to keep up

This worthwhile read in @AeonMag from writer and philosopher @GloriaOriggistarts with a simple proposition: “We are experiencing a fundamental paradigm shift in our relationship to knowledge.”

We need to up our game as information consumers. We have to take shortcuts to deal with all this information that is now available to us because it is too much to vet on our own.

That means more reliance on the reputation of the source of the information we consume.

We tend to discredit sources on a wholesale basis because we don’t agree with their conclusions while we accept information from sources we presumptively agree with.

With more information, this might become even more of a problem since how we align with the source can drive whether we accept the information.

Thus a paradox: as we have more information at our fingertips, we may be exposed to less information that disagrees with us as we use the reputation filter to sort through what we are willing to take the time to explore.

ANOTHER PIECE OF THE BACKFIRE PUZZLE
The problem with diversity training: it’s the training, not the diversity 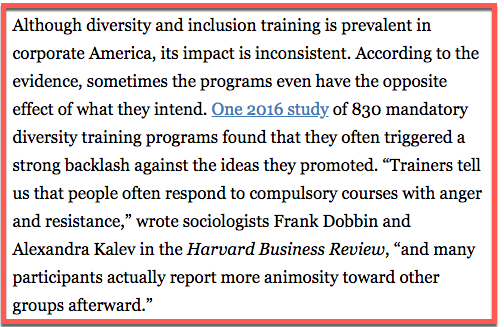 Diversity training, if it’s not done right, can actually cause trainees to come away with more bias.

I suspect this is similar to the backfire effect found after people were exposed to opposing political views.

Telling people, “you have to be inclusive and you can’t be biased” can backfire, causing people to entrench.

In addition, diversity and inclusion training can have the undesirable effect of emphasizing group membership, activating in-group/out-group bias. The training itself can potentially trigger our tribal instinct.

It’s not all bad news, though. The authors make some great suggestions, supported by research, about ways to provide the right structure and frame to reduce some of these undesirable effects and move trainees toward more inclusive attitudes.

DESPITE WHAT YOU SEE HERE, HUMANITY IS SAFE FROM DINOSAURS
T-Rex on fire – in Colorado 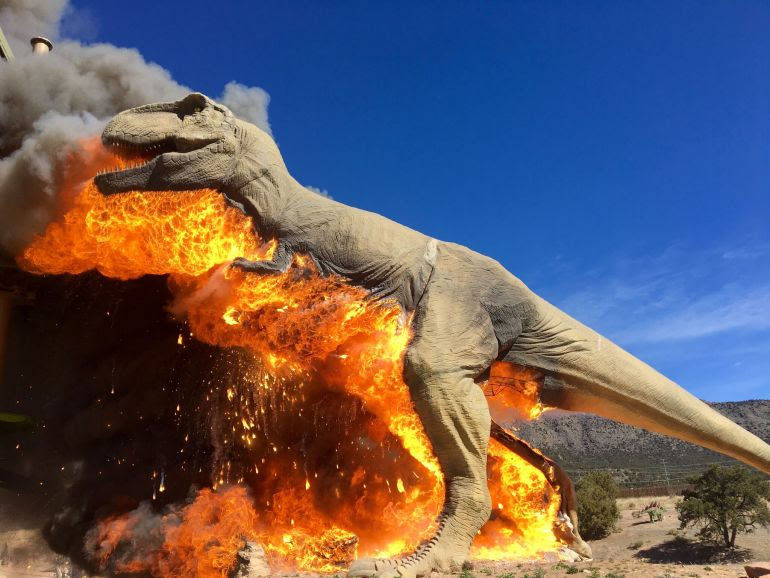 This picture is from KDVR, Fox-Denver 31’s website. A life-sized, animatronic T-Rex at the Royal Gorge Dinosaur Experience in Canon City, Colorado, caught fire due to an electrical issue.

More important, there was no humanity-endangering dinosaur stampede – animatronic or otherwise.

I still prefer reading books in the traditional, printed format, but a friend recently alerted me to an interesting feature on Kindle. If you opt in by sharing what you’ve highlighted, you can see the ten most highlighted portions by other readers.

One of the most highlighted portions of Thinking in Bets (by 400 readers so far) is this quote on pp. 45-46: “In most of our decisions, we are not betting against another person. Rather, we are betting against all the future versions of ourselves that we are not choosing.”

Thinking of decisions as bets is, obviously, a core concept of the book and this quote represents a not-so-obvious and secondary aspect of the concept.

I’m happy to see so many readers have responded to this.

People generally understand betting as betting against other people. So when you say, “every decision is a bet,” the analogy meets some resistance in relation to decisions that aren’t transparently competitive, zero-sum situations (taking a graduate-school course next summer).

It makes more sense once you recognize you’re betting against the version of yourself that would have made a different decision. 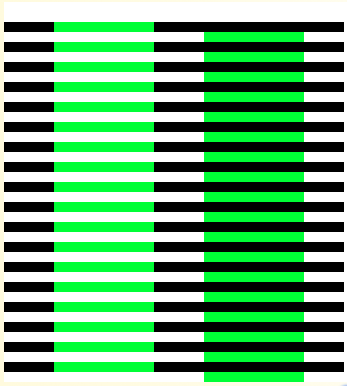 Michael Bach’s website, where I found this, has a version with a slider that pulls the black bars to the right of the image. He also has additional information on the Munker-White Illusion (also called White’s illusion or the Munker illusion), and a remarkable collection of additional illusions.