THE LONG WAY FROM HOME – AND BACK
Notes from the St. Paul’s reunion (Form of ’83) and baccalaureate address (Form of ’18)

I recently had the pleasure of celebrating two events at St. Paul’s School in New Hampshire. In addition to attending my 35th reunion of the Form of 1983, I had the honor of delivering the baccalaureate address to this year’s graduating form. (You can see a video of the speech here.)

I was alternately terrified and excited by the prospect of speaking to the new graduating form. I might speak in front of large groups of people on a regular basis, but something about heading back to my high school charged with the task of sending the graduating form off with words that might be of some use really got to me.

I hope I did my school proud.

Here is an excerpt from the speech.

I had to make peace with the possibility I might have the best hand, play it well and still lose.

And I had to make peace with the possibility I might have the worst hand, play it poorly, and still win.

What I learned from that left turn I took from academics to poker is that how the future will turn is always uncertain. There are always more possible ways the future might unfold than one way it actually does unfold.

The decisions you make in your life will determine the set of possible outcomes. But which of those possibilities actually happens is determined by luck.

I imagine it sounds somewhat nihilistic telling you in a baccalaureate speech that luck will have a strong influence on the way your lives turn out, that your lives will not solely be determined by your grit and your hard work.

But here’s the thing: This is all actually really good news.

It means the future is not set. The future contains a big range of possibilities, many of which you can’t even imagine from where you are sitting right now.

I certainly never imagined as a graduating sixth former that I would become a professional poker player.

But they might end in the most spectacular successes, successes that would never be possible if you didn’t challenge yourself to take that new route.

DANIEL KAHNEMAN TURNS UP THE VOLUME ON “NOISE”
We should listen!

Daniel Kahneman recently delivered the keynote address at the 71st CFA Institute Annual Conference in Hong Kong. He spoke for more than an hour on optimism, failure, intuition, hindsight bias, and loss aversion, directed toward strategies for better decision making in finance and life.

The video of the speech is well worth watching, and there is also a great summary of Kahneman’s remarks by Paul McCaffrey, “Daniel Kahneman: Four Keys to Better Decision Making.”

Kahneman’s message includes his growing interest in the effect of noise (uncertainty, the looseness of the connection between decisions and outcomes) in decision making.

He gave an example from a study of insurance underwriters. The underwriters (from the same company) read the same file and determined a premium.

How much divergence was there in the premiums?

One might guess that since assessing premiums is so quantitative and the parameters are well defined, a 10% difference among underwriters might be reasonable.

When the actual divergence was computed, it was 56%!

As he said in the speech, “How can it be that people have that amount of noise in judgment and not be aware of it?”

If that doesn’t convince you that the noise in the system is greater than you think, he explains how there can be variation even within a single person:

Noise interferes with learning from experience, because noise degrades the fidelity of the feedback we learn from. This makes it hard to draw conclusions about why the future unfolded as it did.

Kahneman, with Gary Klein, referred to “kind” and “wicked” learning environments in a 2009 paper in American Psychologist. (Robin Hogarth introduced the terminology.)

In kind learning environments, we get lots of feedback, we get it fast, the feedback is meaningful, and we can use it to change our behavior.

Chess is a good example of a kind learning environment.

In wicked learning environments, the feedback either is very noisy so low fidelity, or it could be high fidelity but come too late to be useful.

Poker is a wicked learning environment.

You might get tricked into thinking poker is a kind environment because there are lots of decisions tied closely in time to real-money consequences. But those consequences, whether you win or lose the hand, are only very loosely tied to decision quality. You can win and play poorly, or lose and play well.

Making matters worse, the cards rarely get revealed when a hand ends.

The cloud of incomplete information rarely gets resolved and whether you win or lose is only loosely related to the decisions you made on any one hand.

That is pretty wicked.

Kahneman is working on a new book on the subject (called Noise) with Cass Sunstein and Olivier Sibony. I’m super excited for the book because I think it’s going to delve deeply into what it means to learn in a noisy world.

The book won’t be out until 2020, so I am happy to get this preview into Kahneman’s thinking.

(I also recommend the paper he wrote with three colleagues in 2016 for @HarvardBiz, “Noise: How to Overcome the High, Hidden Cost of Inconsistent Decision Making.”)

BEATEN BY PIGEONS?
The Monty Hall Dilemma, and why calling someone a bird brain may be a compliment

I imagine everybody is familiar with the game show, Let’s Make a Deal, which debuted in 1963 and is still being produced today. In its heyday with host Monty Hall, it was one of the most popular game shows of all time.

It also spawned a famous illustration of the difficulties we have understanding probability: the Monty Hall Problem (also called the Monty Hall Dilemma or Paradox).

The problem got its name from a common scenario on Let’s Make a Deal.

A contestant gets a choice between three doors.

Behind one of the doors is a car.

Behind the other two? A goat or similarly ridiculous, worthless prize.

He then offers them a choice: stick with their initial choice or switch to what’s behind the other (unchosen and unopened) door.

Do you switch doors?

The proper strategy, an accepted part of probability theory, is that you should always switch.

When the contestant initially chooses the doors, there will be a car behind the door they chose one third of the time.

When they are offered to switch, they will improve their odds of getting the car to two thirds. (Hint: it really matters that Monty Hall knows where the car is; the reveal isn’t random.)

If you don’t believe me, try it out a bunch of times and you’ll see that switching wins you the prize twice as often.

If it seems difficult to understand initially, you’re not alone. Most people stick with their original choice (even after many rounds of the game).

According to a review of the literature in a 2018 Psychologica Belgica article, 79-87% won’t switch.

One of the great tidbits in the review: In lab tests of pigeons reported in the Journal of Comparative Psychology, pigeons pick up on the optimal strategy – switching – more quickly than human subjects. (Pigeons were enticed by “mixed grains,” a reasonable pigeon equivalent of a 1973 Ford Pinto. Humans were competing for high scores.)

I believe one of the reasons pigeons behave more optimally is because they can’t imagine the future in the same way humans can.

Pigeons aren’t stuck with our fear of the regret we will feel if they switch doors and it turns out the car was behind their original door.

Monty Hall shows you the goat behind Door #2.

He offers you to switch to Door #3. You switch. And it turns out the car was behind Door #1 after all.

You chose the car and then you gave it up. If you get divorced, you can imagine your ex pulling out this story of how you’re a chronic loser.

Yet if you stick with your original door and it turns out the car was behind the new door, it doesn’t feel so bad.

Pigeons can’t think far enough into the future to imagine the mixed grains they almost had so much that they’ll make a worse choice to avoid the pangs of regret.

Pigeons are more purely frequentists, not plagued in the same way by these biases or by fear of regret.

So maybe calling a person “bird-brained” is actually insulting to birds rather than the other way around.

H/t to @Foulke_David for sending me the Psychologica Belgica article by Lore Saenen and colleagues and pointing me to the bit about the pigeons.

SOME HISTORY OF THE MONTY HALL DILEMMA

If you’re not familiar, the Monty Hall Problem has a rich history. It poses a similar math problem to Bertrand’s Box (late-nineteenth century) and the Three Prisoners (late Fifties).

It got its current nickname because Steve Selvin proposed it (along with the solution) with an example from Let’s Make a Deal, in a February 1975 letter to American Statistician. He referred to it specifically as “the Monty Hall Problem” in a follow-up letter it published that August.

The Problem became part of the pop-culture zeitgeist in 1990 when Marilyn vos Savant wrote a Parade column answering this question:

She received 10,000 letters telling her she was wrong, including many from math professors. She spent the next year periodically returning to the subject to respond to the overwhelming criticism.

H/t to the following:

WHO KNEW MY BOOK WAS SO EXISTENTIAL?
Thanks to @AboutMattLaw 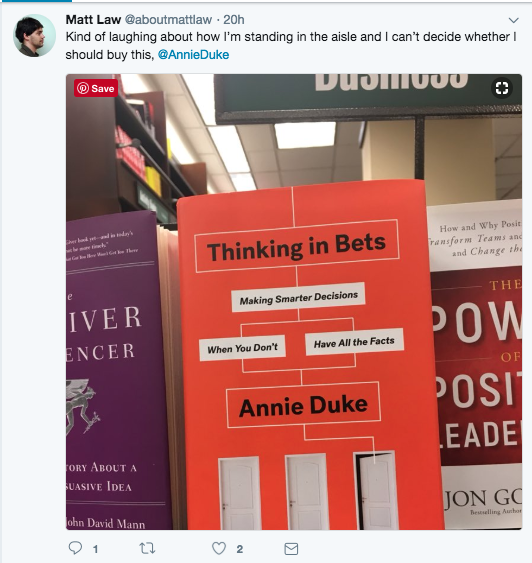 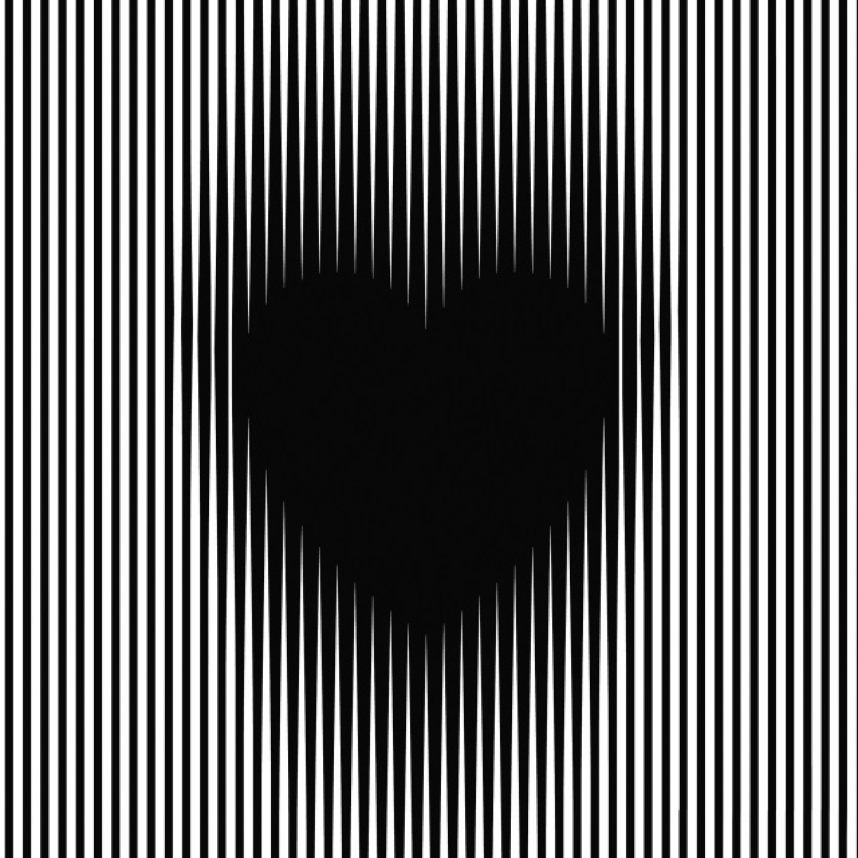