MADELEINE ALBRIGHT:  DIPLOMACY IS NOT LIKE CHESS
Skill-based decision making, but with unpredictability like billiards (and poker)

In a recent interview, former Secretary of State @Madeleine Albright commented on how people who compare international relations to chess may be overlooking the uncertainty in the relationship between decisions and outcomes. Billiards, she thought, was a better analogy:

“People talk about international diplomacy and international relations as a game of chess. It’s not a game of chess where two people sit quietly in a room and think about the moves they’re going to make and take time between their moves. It’s more like pool – billiards – where there are a bunch of balls in the middle of the table and somebody comes with a cue stick with the hope of getting a ball into one of the pockets on the sides and on the way, it hits a lot of other balls.”

I suspect Secretary Albright might find poker to be an even better analogy to diplomacy. Like her example of billiards, poker has uncertainty due to changing circumstances and randomness. But poker also shares the element of hidden information with diplomacy. Billiards lacks that element.

Some important details if you’re looking into this:

Some of my best content is coming from readers. I enjoy the interaction and it’s undoubtedly multiplying my access to information on issues of our common interest. Thank you, Matt, and keep ’em coming!

ARE WE STUCK IN A SCI-FI MOVIE OR A HORROR MOVIE?
(Epistemic) bubble or (Echo) chamber, with different routes of escape

We’ve been hearing a lot lately about echo chambers. A recent article on @AeonMag by C Thi Nguyen (@Add_Hawk), “Escape the echo chamber,” points out that we use the term too broadly, confusing “echo chambers” and “epistemic bubbles.”

The cost of the confusion: the two conditions have different causes, require different routes of escape, so if we conflate them, we’re not going to make it out – or even understand why.

I highly recommend you read the article for the nuances that accompany his explanation, but this is a helpful summary from the second paragraph:

Essentially, we escape not hearing by listening, and not trusting by … trusting?

When we’re in an epistemic bubble, the solution cuts against our self-selection of views that agree with us but it’s straightforward: expose ourselves to views outside our bubble.

In an echo chamber, however, information exposure alone isn’t enough because the problem isn’t lack of information. It’s a lack of trust because the information is coming from an untrustworthy source (another tribe).

In the March 30, newsletter (“Rebellion Against the Bots!”), I discussed a new studyabout exposing self-identified Democrats and Republicans to Twitter bots retweeting messages from elites of the opposite party in the weeks before the November 2016 presidential election.

Exposing people to additional, opposing information did not help update beliefs. In fact, subsequent surveys showed that the exposure could backfire, further entrenching and polarizing views.

The echo-chamber vs. epistemic-bubble distinction explains this result pretty nicely. If the problem was that voters were in an epistemic bubble, exposure to opposing-view bots would have moderated their views.

What’s clear is that (at least for the subjects at the time of the study) party voters were living in echo chambers, where they didn’t trust information coming from the other side. Exposure alone won’t moderate views; once it’s tribal, we’re going to discredit the additional information because it comes from the other tribe.

The bad news is that so many of us seem to be in these echo chambers, and there’s no easy way out.

Where’s the good news? Yes, creating trust is much more difficult than merely exposing people to diverse information. More difficult but it can happen.

Nguyen points to Derek Black’s story. You can look him up but the @WashingtonPost did a detailed profile on him and he wrote an op-ed for the @NYTimes, “Why I Left White Nationalism.”

Black was brought up to become the leader of a white nationalist movement. His father created the Internet’s first and largest white nationalist site. His godfather was David Duke, former Grand Wizard of the KKK. At the age of 19, he was considered a “leading light” of the movement, hosting his own radio show, starting a white nationalist website for children, and winning a local political election in Florida.

What caused him to change?

He decided to go to a college where his views were unknown. When he was outed as a white nationalist, another student he knew (instead of reacting with disgust) invited him to a Sabbath dinner. He went, and returned every week. As he developed relationships with this diverse group – including out-group members his group had taught him to demonize – he realized they were just … people. That led to mutual trust and honesty, which made it possible for him to be openminded toward new views (and for his friends to present these views in ways that invited discussion).

The same thing is at work in instances where politicians advocating an anti-LGBQT agenda learn a family member is gay and re-examine their position.

Maybe there’s a clue in there. 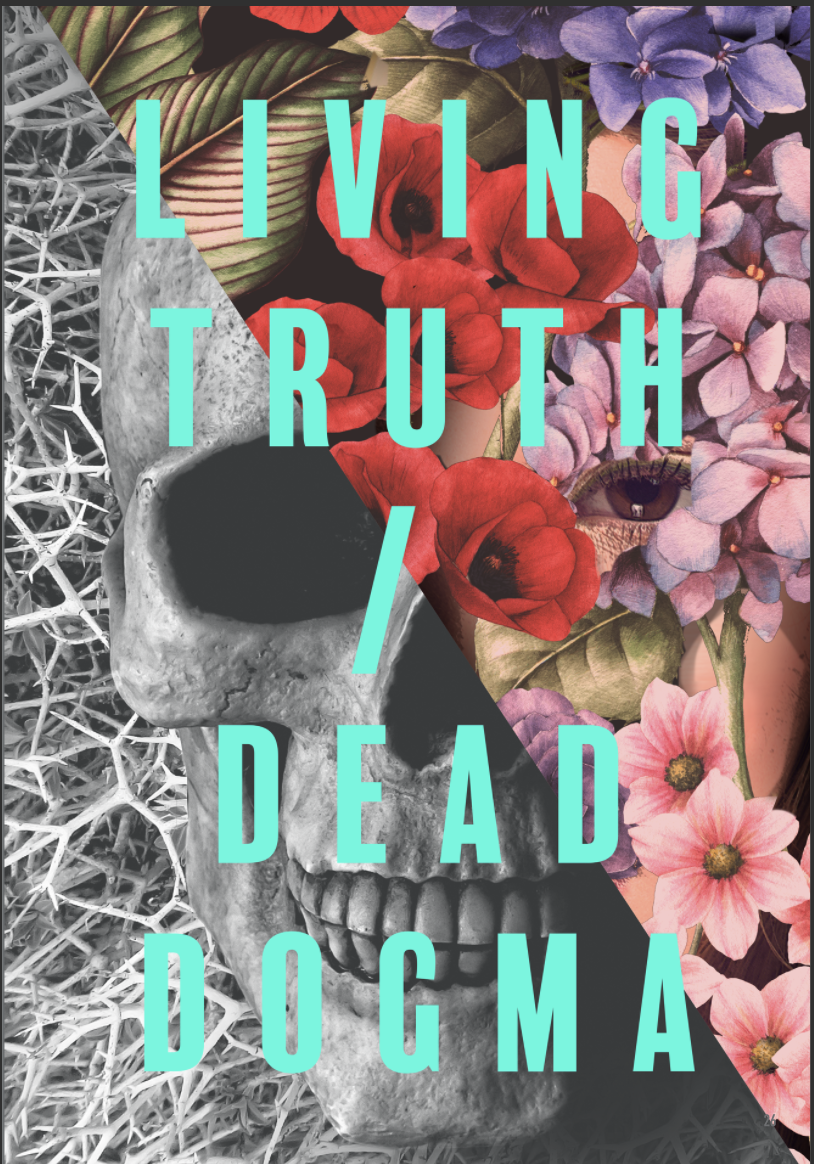 John Stuart Mill is one of the all-time heroes of decision making. Chapter 2 of his 1859 masterpiece, On Liberty, remains the most persuasive explanation of why public discourse requires the unfettered expression of dissenting views. That chapter, stripped of the surrounding material and some now-obscure references, has been made accessible to the next generation of decision makers. @HdxAcademy has published an edited, illustrated version, titled All Minus One: John Stuart Mill’s Ideas on Free Speech Illustrated.

To see that it gets in the hands of as many students as possible, Heterodox Academy, along with editors @RichardVReeves and @JonHaidt and illustrator Dave Cicirelli, have made it available in the following formats:

Heterodox Academy notes it’s not just for students but for “any organization in which people would benefit from productive disagreement.”

That means, of course, everybody.

The quote in the headline made a circuitous path to this newsletter, but I think it was worth the trip. I read it in a short @FarnamStreet blog, “The Probability Distribution of the Future”. They got it from Howard Marks (The Most Important Thing: Uncommon Sense for the Thoughtful Investor), who got it from finance professor Elroy Dimson.

What a great definition.

For there to be risk, more futures must be possible than the one that will actually occur. If you could predict the future that would unfold with certainty there would be no risk.

In addition, assessing risk requires thinking about your own tolerance for bad outcomes.

This can be expressed as “probability of failure x consequences.” 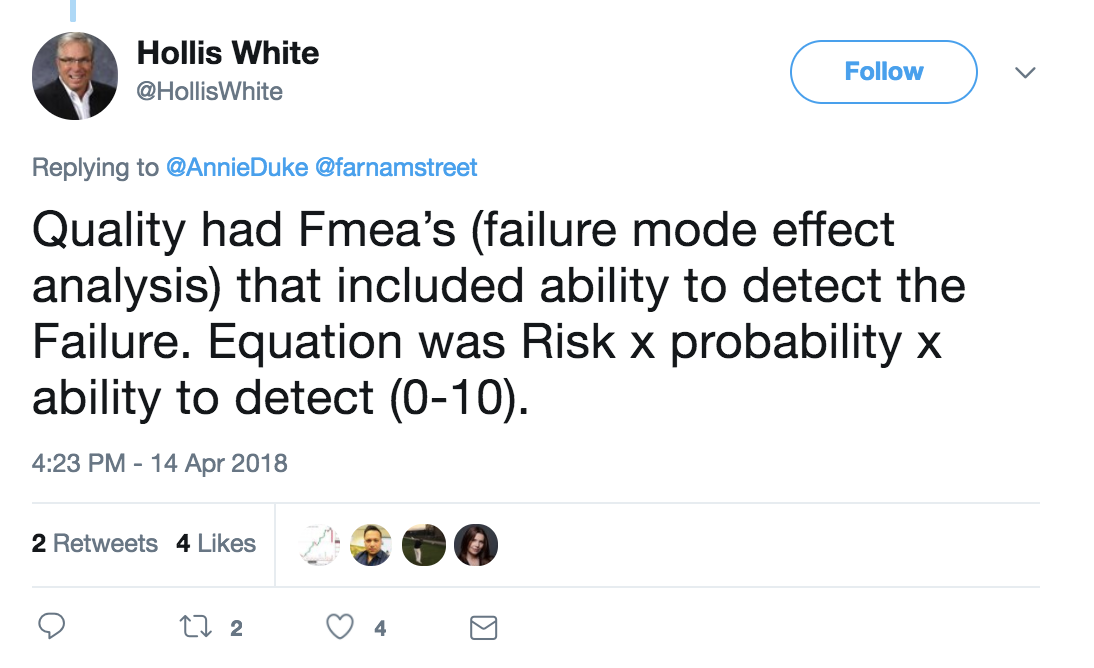 All this and we haven’t even gotten to considering the payoff in assessing risk tolerance!

SAM HINKIE, THE PROCESS, AND THE SIXERS
Two years after his resignation, resulters may be getting ready to re-assess

Thomas McGarrigle heard me speak about decision strategy at the Union League in Philadelphia  and emailed me after to call my attention to Sam Hinkie’s resignation letter from the Philadelphia 76ers in April 2016.

I’d heard of Hinkie, in charge of basketball operations from 2013 until his resignation, a period of a lot of losing, long-term moves that hadn’t yet succeeded or concluded, and more losing, and was generally aware of his approach, and basketball’s general advancement in using analytics to improve decision making.

But I can’t believe I wasn’t familiar the letter. (Another wonderful example of valuable information I’m getting from readers of the newsletter!)

The letter is thirteen pages and it’s packed with decision-making insights. He summed up his approach and experience with the Sixers, starting with a section titled “Thinking about thinking,” warning about a tradition-bound sports error: resulting.

His approach “requires you to divorce process from outcome. You can be right for the wrong reasons. In our business, you’re often lionized for it. You can be wrong for the right reasons.”

Not only does he talk about resulting, but he’s also a fan of “the willingness to say three simple words, ‘I don’t know.'”

Hinkie then explains his approach in eight parts and applies it to the status of the team on the date of his resignation.

Looking at his evaluation of the state of the team, his predictions line up pretty well with what has happened since.

Writing from the perspective of a guy resigning under pressure at the end of a 10-72 season, he asserts that a great bench needs four or so years to develop and realize its talent in results.

The success of the Sixers this season makes Hinkie look prophetic.

Whether you follow basketball or not, it’s a must-read for anyone interested in luck, skill, and uncertainty in decisions.

THIS WEEK’S VISUAL ILLUSION
From @AkiyoshiKitaoka 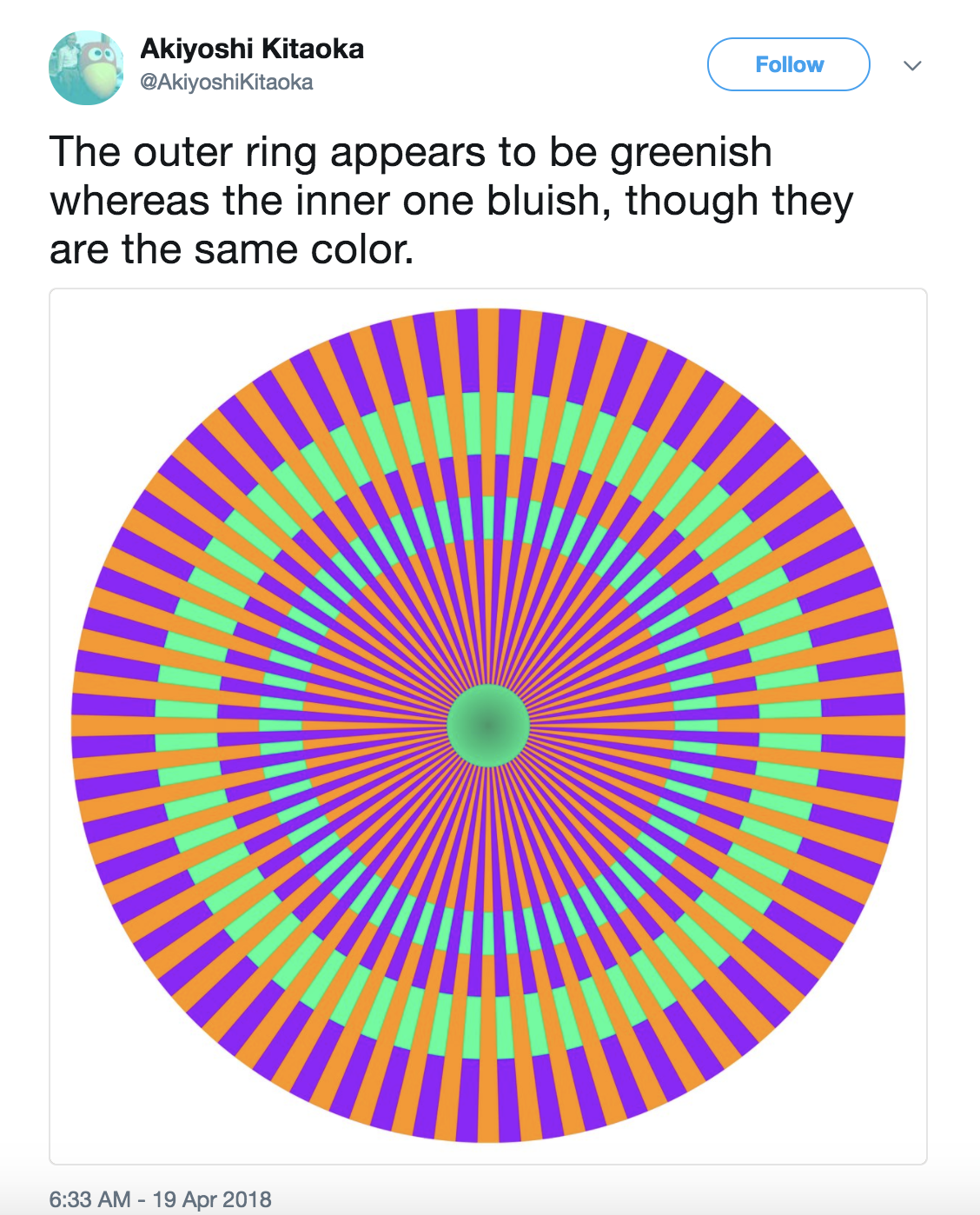