Bad News in the Event of a Zombie Apocalypse – Annie’s Newsletter, April 13th, 2018

BAD NEWS IN THE EVENT OF A ZOMBIE APOCALYPSE:
Overconfidence by inexperienced doctors diagnosing zombie infections —
When they tell you “overconfidence is an issue everywhere,” they mean EVERYWHERE

Experience can certainly help us improve our competence. And that’s a good thing.

But it turns out that a little competence also makes us vastly overrate our abilities. In tasks where performance gradually improves, overconfidence spikes at the first sign of learning.

A recent study described in @HarvardBiz by Carmen Sanchez and @DavidDunning6 tested subjects’ actual accuracy versus their perceived accuracy at diagnosing strange new infections, based on lists of symptoms, after a zombie apocalypse. At the start, their actual accuracy averaged 55%, and they rated themselves at 50% accurate. Once they started to get a few more diagnoses right (still less than 60% accuracy), they overestimated their accuracy at 73%. 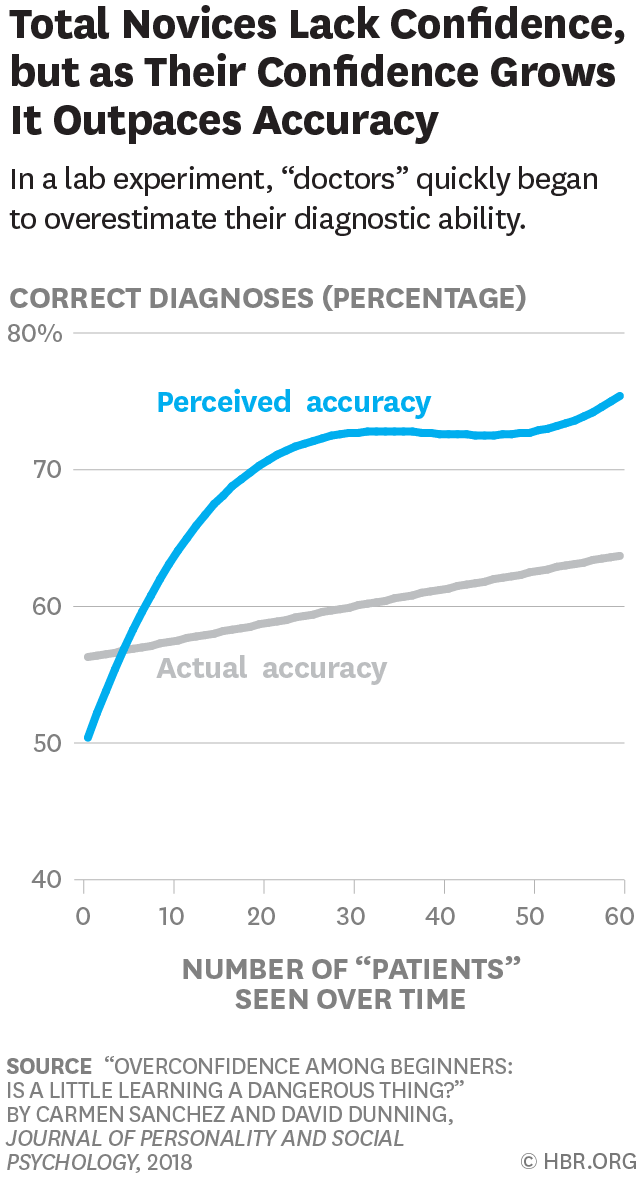 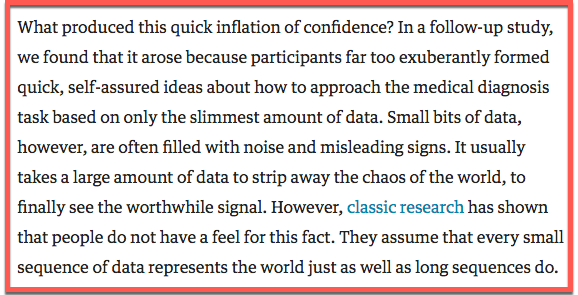 ANOTHER INFECTION FROM OVERCONFIDENCE: AND IT SPREADS ONLINE
Watching a tutorial video on how to juggle chainsaws does NOT make you chainsaw-proficient

According to a study reported in @ScienceDaily, watching YouTube, Instagram, and Facebook tutorials makes people overestimate their ability to perform the skills, even when their abilities haven’t changed.

One of the key concepts in Thinking in Bets is that we face a gap between our carefully-considered goals and our ability to execute on those goals in subsequent decisions. I was happy to see  Root Inc. (@TheRootInc) publish an excerpt from Thinking in Bets, one that hasn’t appeared anywhere else yet (except in the book, of course!).

The excerpt features one of my favorite stories from the book, about my friend, David Grey, betting that a man named Ira the Whale could eat 100 White Castle burgers in one sitting. As David recounted, “I knew I was a lock when he ordered the first twenty, and also asked for a chocolate shake and fries.”.

What does a bet on 100 White Castle burgers have to do with thinking more rationally?

You’ll have to read it to find out!

DO YOU KNOW @KNOWTHEFLIPSIDE?
Every weekday, a briefing on each side’s coverage of a big story

I just started following @KnowTheFlipSide on Twitter. Nicely complementary to @TheKnifeMedia, The Flip Side (which also has a newsletter) is a resource we can use to intentionally foster open-mindedness by constructively exposing ourselves to news coverage from both sides of the aisle.

The Flip Side and The Knife offer a good combination for this purpose. The Flip Sidelinks you to conservative and liberal coverage of issues in the news, so you can read and explore both versions of the story.

The Knife takes that a step further, exposing spin and bias in coverage and offering the same news stripped of those things.

In a game like poker, luck has a big and easily visible influence in the short run. The best player starting with the best cards can lose any given hand due to luck and the worst player starting with the worst cards can win due to luck. Because of this, one of the most common questions I got asked when I played poker was, “Isn’t poker just all luck?”

My first attempts at answering this question involved trying to explain that players with more skill have a higher expected value (EV) that expresses itself over the long run. Although there is a lot of short term volatility, the skill element will eventually dominate over time.

This proved unconvincing to most people. They couldn’t see past the short-term influence of luck.

Then I happened upon a pretty convincing argument: “In poker, you can lose on purpose. You can only do that in a game of skill.”

I recently received a lovely note from Arthur Reber, a behavioral scientist who’s also a poker player. He was kind enough to send me a 2012 paper he had written that offers a helpful framework for how to think about luck and skill in games.

He proposes an EVF model for thinking about luck and skill in games. The EV part refers to expected value, which is what we normally think about when deciding if a game is skill or not. Are you winning to the game? But we also must think about whether the game is flexible. Do the choices the players make during play affect the expected outcome? In baccarat there is no flexibility. In poker there is a lot.

A game could have positive expected value and be inflexible, meaning yes you are winning if you play but your choices have no impact on the outcome. Reber, rightly, argues that would not be a skill game because it is inflexible.

I find the EVF model really helpful for thinking about luck and skill in games.

Thanks for sharing it, Arthur!

CHESSBOXING
Oh, don’t worry: It’s exactly what it sounds like

Earlier this week, I tweeted a link to a fun piece I read in @Mental_Floss about chessboxing.

Opponents alternate eleven rounds of speed chess and boxing, or until there’s a checkmate, knockout, or someone tips over their king or throws in the towel.

@JosephBuell easily topped me with his reply:

At the beginning of April, I appeared on Adam Pascarella’s (@APascar) @ThePowerOfBold podcast. You can listen to the interview, see the show notes, and get a transcript here.

We discussed, among many other things, the importance of premortems – imagining negative outcomes and their reasons – in making decisions and planning for the future. It’s a good counterbalance to the power of “positive” thinking.

That started a constructive discussion on examples of premortems and places where you can read more about this kind of thinking.

GEE WHIZ!
How we can see something all the time and not notice it

I posted this on Twitter last week. See if you can spot the lowercase G: 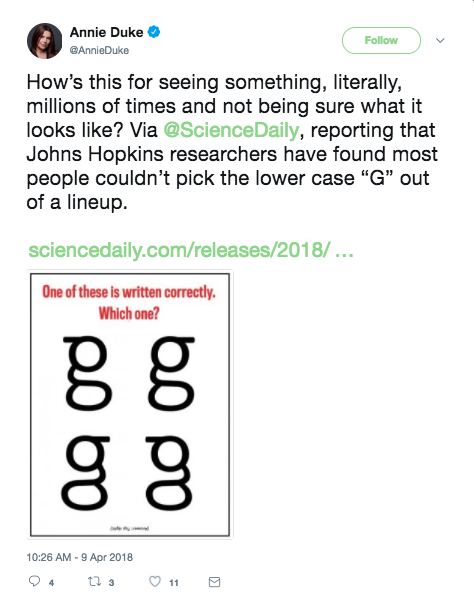