REBELLION AGAINST THE BOTS!
A new study exposed Twitter users to opposing-view bots: It didn’t end well
Left to our own devices, we aren’t likely to seek out views that oppose our core beliefs.”An opposing view? No thanks. I’m comfortable in my echo chamber, thank you.”The hope, though, is that if more of us were reading and hearing those opposing views, we’d all be able to understand to each other better. Maybe we would all be less polarized.According to a new study just posted on SocArXiv Papers, that may be wishful thinking. Turns out that while exposure to opposing views is certainly a necessary ingredient for moderating our beliefs, it is not sufficient.In fact, mere exposure to opposing political views can increase polarization.The researchers paid self-identified Republicans to follow a Twitter-bot that retweeted messages from Democrats and self-identified Democrats to follow a Twitter-bot that retweeted messages from Republicans.After exposure to these messages from the opposing party, the subjects’ views did not become more moderated.

In fact, they became more polarized.

This backfire effect wasn’t significant among Democrats but was pretty big among Republicans, highly significant at the p <.001 level. Certainly, there was no moderating of views going on for either side.

I am not that surprised that, without some commitment to open-mindedness to opposing viewpoints and some structure around how to process those opposing views, polarization didn’t decrease.

In this study, the subjects were motivated to read the opposing viewpoints by being paid to do it. One of the things that we know is that when you pay somebody for something, that becomes the reason why they’re looking at it. In that case you would be less likely to get attitudinal change.

The study also wasn’t designed to create constructive conversation around how to process the opposing viewpoints. Without the support of a really well-formed group that promotes accuracy and openness to diverse viewpoints, it’s very hard to resist dismissing those views.

Because of how we form and hold on to beliefs, we’re just not going to get to open-mindedness on our own.

Even so, I am surprised that polarization increased. That tells us we need to be careful about how we expose people to views from the other tribe.

H/t @JayVanBavel and @MattGrossmann, whose tweets brought the study to my attention.

A recent article in @BehScientist by BYU economics professor Joseph Price described how the firing of Phoenix Suns coach Earl Watson – after starting the season 0-3 – ended the NBA’s longest-ever (533 days) streak without a coach losing his job. Despite the streak, no one likely believed things had changed. Just two years ago, sixteen NBA teams fired their coaches. Price’s explanation of outcome bias (resulting) underlines the problem of using results to derive decision quality:

The article also described an interesting study of 20,000 NBA games, finding that coaches are 17% more likely to change their line-up following a close loss than a close victory.

It’s not surprising that line-up changes would be more likely to follow big losses than big wins. But, as Price points out, “What is surprising is that there is a sharp and immediate drop right at the comparison between winning by one point and losing by one point.”

The difference between winning or losing by one point is likely attributable to luck so there should really be no difference in line-up changes as a result.

That line-up changes are more likely to occur after close losses than close wins is one of the best examples I’ve seen of resulting.

Interesting reading. h/t @DGardner@Jens_Noll for bringing this to my attention on Twitter.

EVERYTHING HAS A PROBABILITY
Watch Liv Boeree’s TED talk, “A Number Speaks a Thousand Words”

Count on poker players to think in bets to evaluate any proposition, even love, romance, and partnership. Poker player @Liv_Boeree was with her boyfriend (also a poker player), and he asked her, “Liv, what do you think the likelihood is that we’ll still be together in three years time?”

This is how Boeree started her @TEDxManchestertalk on uncertainty. What I really love about her approach is the idea of putting numbers to things that we treat as sacred cows.

For most people, it would be very uncomfortable to consider the probability of such things as whether we will still be with our partner in the future – at least not out loud, in a discussion with our partner.

But why not? The fact is that the chances that a relationship will continue at some time in the future can be expressed as a probability. It can be quantified. Yet, we tend to think actually speaking those probabilities out loud takes the magic out of things we imagine are magical, meant to be, or inexplicable.

Liv Boeree wants us to consider that we are better off speaking these probabilities out loud —about everything.

Don’t be afraid of expressing probabilities because everything really can be expressed probabilistically.

It’s not only “okay” to try quantifying such things; it is better to explicitly quantify the chances because it allows you to make better decisionsabout the things you are generally afraid to quantify.

I love the idea of poking at things that we put into the magical category like love and romance.

She makes an excellent point about the importance of trying to see the world as it is, in probabilities, and she communicates the message in a very provocative way.

AN UNTOUCHABLE DAY?
Great example of a Ulysses contract in action

Here is a must-read article in @HarvardBiz by author and speaker @NeilPasrichathat offers one of the best examples I’ve seen of the power of a Ulysses contract.

Pasricha transitioned from the corporate world to writing and speaking but found that the tug of traditional interruptions (meetings, calls, emails, etc.) limited his productivity.

So he started planning – sixteen weeks in advance – “untouchable days.” On untouchable days, he blocks out interruptions: nothing else on his schedule, Wi-Fi disabled, phone on Airplane Mode.

How has it worked out? He says his productivity has exploded:

Can he break the contract? Obviously, no one is going to put him in jail if he breaks it, but he has made himself accountable to not breaking it. He has worked out how to deal with emergency situations, and also figures out how to keep the contract if he has to change his schedule:

The article is as practical as it is inspiring.

This is what a good Ulysses contract looks like.

OH, AND MY BOOK IS STILL OUT
In the February 9 newsletter, I closed with the item, “Oh, and my book came out.” I had a number of positive experiences in interviews and podcasts shortly before the release of Thinking in Bets and shared where you could find six of them. Since then I mentioned my conversations with @JAltucher (Feb. 23 newsletter) and Brett McKay on @ArtofManliness (March 16 newsletter). You can check those three newsletters for links and highlights.

Here are links to some additional audio and video interviews I’ve done in connection with the book:

THIS WEEK’S VISUAL ILLUSION
Coming, maybe, to a hallway near you

I saw an awesome collision of visual illusion and nudge in this week’s illusion, a tweet from @WorldAndScience. 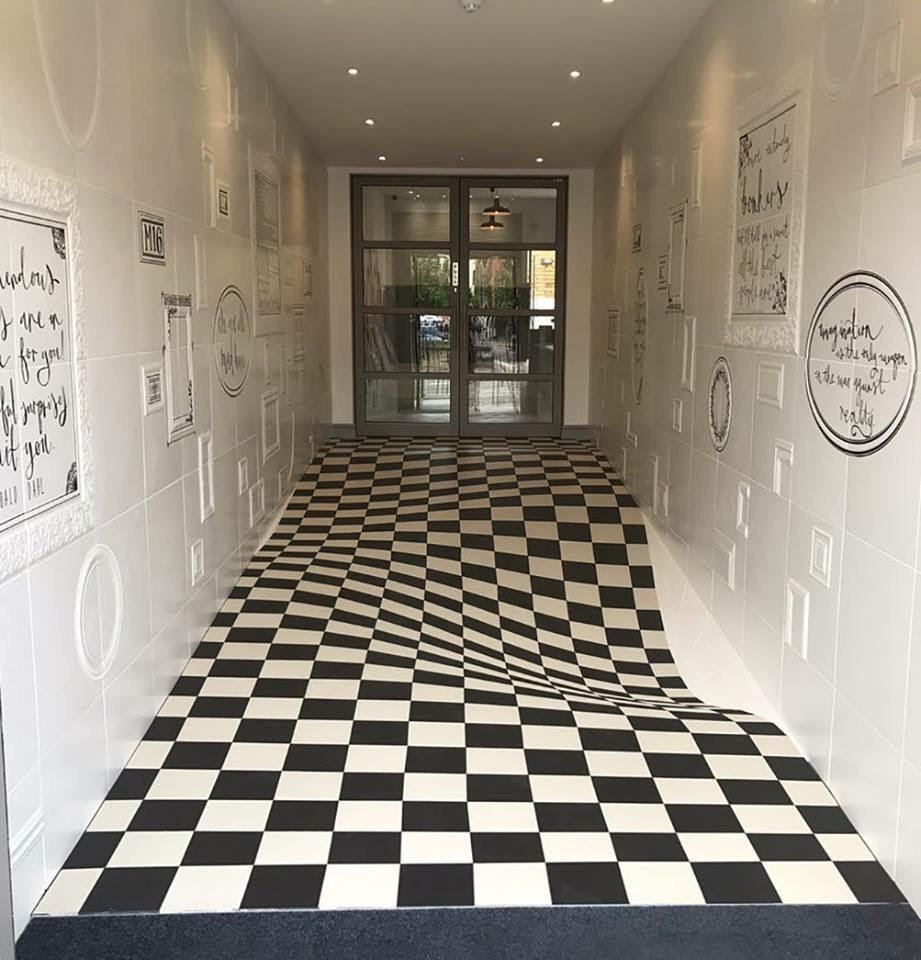