TUESDAY IS PUBLICATION DAY FOR THINKING IN BETS 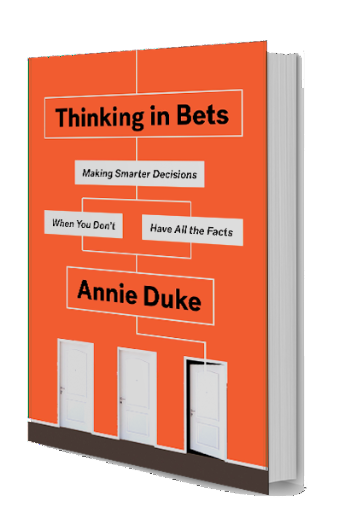 This Tuesday, February 6, is Publication Day for Thinking in Bets: Making Smarter Decisions When You Don’t Have All the Facts (hardcover, Kindle, iBook, audiobook).

If you want to get a flavor of the book, you can hear me read the first two sections of Chapter 1. Penguin posted my narration of the first section, titled “Pete Carroll and the Monday Morning Quarterbacks.” Parade.com published an excerpt (with audio) of the second section of Chapter 1, titled “The Hazards of Resulting.”

Even if the release of Thinking in Bets weren’t imminent, I’d consider this an exciting time for books about decision-making and behavior. This week, Daniel Coyle’s The Culture Code: The Secrets of Highly Successful Groups came out. In less than a month – on the same day, February 27 – Nassim Taleb’s Skin in the Game: Hidden Asymmetries in Daily Life and Stephen Pinker’s Enlightenment Now: The Case for Reason, Science, Humanism, and Progress will be available.

LUCK PLAYS A BIGGER ROLE IN OUTCOMES THAN WE PRESUME

Last week, I wrote a piece for Michael Smerconish’s (@Smerconish) site about the role of luck in income inequality. I described a computer simulation of a random game (which you can read about read in greater detail where I saw it here: DecisionScienceNews.com): 45 players get $45 each ($2,025 total) to start the game and on each round they give a dollar to another player on a random basis. Who gets money on any round is driven completely by luck, no skill involved. After running a simulation of the game for 5,000 rounds, the richest player ends up with over $200 or 10% of the total money), and the top three players (out of 45) end up with 25% of the money. I was pretty shocked by the result and I certainly wasn’t alone.

I sent the DecisionScienceNews.com article to my friend Sam Barnett. Sam recently earned his Ph.D. in neuroscience from Northwestern University while doing his day job as CEO of SBB Research Group. He was so intrigued by the result that, in his spare time, he programmed his own simulation of the game to dig a little deeper into the result.

“DID I JUST SEE LAURA DERN IN A PET STORE?”

I asked her about the atmosphere in Hollywood these days. She said only that it was “rough.”

Last week, I tweeted an item from Mashable.com about the thousands of people who thought this dog resembled actress Laura Dern. (Dern even commented on the resemblance.) 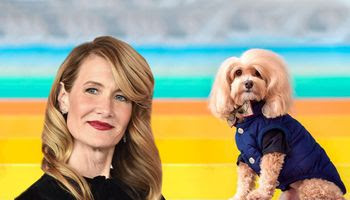 The Mashable piece lays out nicely that the internet going mad for this Laura Dern look-alike actually tells us something quite deep about how we process the world. Evolution made us pattern recognizers because being really good at recognizing patterns helped us survive, particularly recognizing faces–most importantly, our mothers’ faces. Being hypersensitive to facial features allows us to distinguish friend from foe, love from threat. We’re going to see human faces all over the place because that’s how we’re wired.

If you want to see some more of this in action, check out the Twitter account @FacePics. Faces in mop heads, coffee stirrers, planters, cracks in the sidewalks, pies, tin-can lids.

Rolf Degen (@DegenRolf), who regularly tweets about research findings in psychology, neuroscience, and evolutionary biology, recently made a pair of powerful observations that explain why the internet seems doomed to be a series of echo chambers.

The two papers Degen cites paint a gloomy picture of online discourse. The first paper suggests that we find discussing divisive issues to be threatening, so we tend to avoid conversations where diverse viewpoints are clashing. The second paper is about how the online world amplifies the threat. If there’s anonymity, it’s a lot easier to get attacked for our viewpoint. If we want to express our contrary opinion in an online forum, it’s also more likely that the attack is going to come from a mob.

The result? We gravitate to content we expect will support what we already believe and are unlikely to speak up when we do disagree. That’s a bad combo for changing minds. 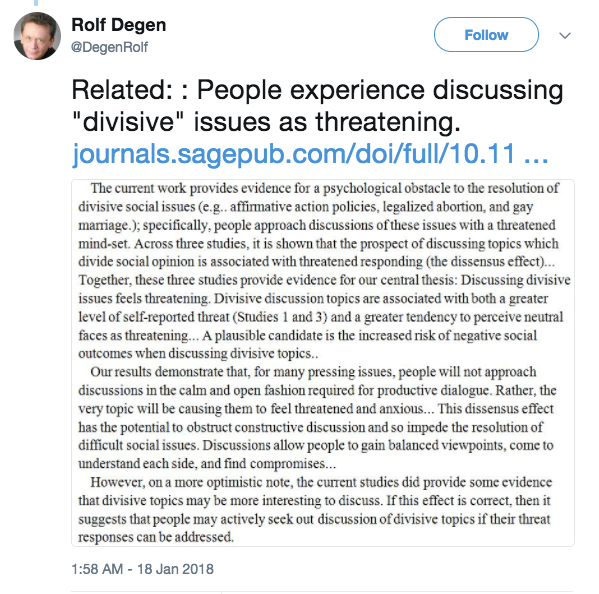 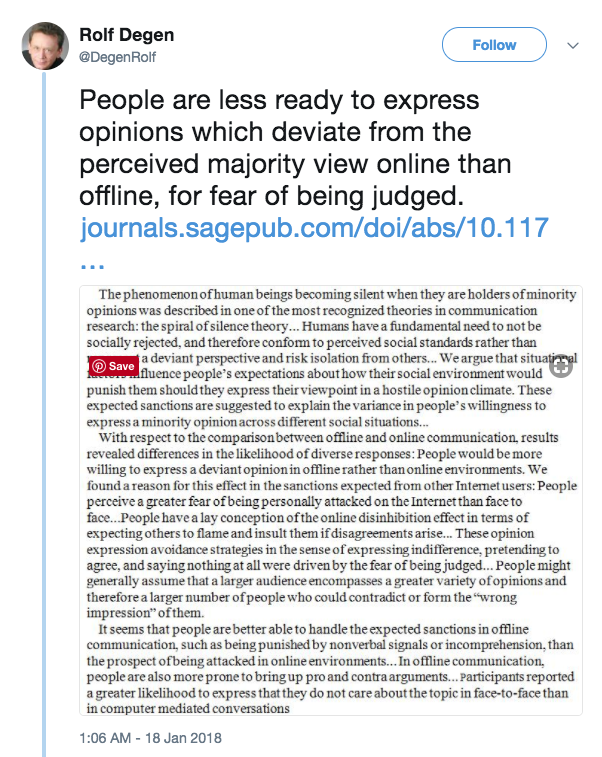 A BRILLIANT ANTIDOTE TO ECHO-CHAMBER MENTALITY!
Conversations with People Who Hate [Dylan Marron]

Dylan Marron (@DylanMarron) is a popular writer, performer, and video maker. Because he takes strong positions in his work on a number of public-policy issues, he reads some pretty nasty things about himself in the comments section. Last July, as he announced on YouTube, he turned those comments into a podcast, titled “Conversations with People Who Hate Me.”

I think this is a brilliant concept. He finds people who say awful things about him and invites them as guests on his podcast–not to call them out, or bully them, or say nasty things back but to have civil conversations with them about why they posted what they did, where they disagree, and where they have common ground. Whether you agree with Marron’s views on the issues or not, the podcast is a brilliant exercise in taking potentially unproductive, emotional, unsatisfying exchanges and turning them into something from which both sides can learn.